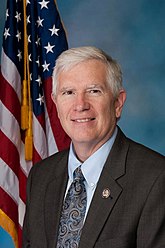 Morris Jackson "Mo" Brooks Jr. (1954–) is a Republican member of the House of Representatives from Alabama, member of the Freedom Caucus, and stereotypical right wing blabbermouth aboard the Trump clown car, until the car ran out of space for him.

See the main article on this topic: Abortion

Brooks is a passenger on the Global Warming Denying Wingnut Train™. During a May 2018 hearing of the House Science, Space, and Technology Commitee, Brooks not only brought out the tired denialist claim that the Antarctic ice cap is actually growing, he proclaimed that rising sea levels are caused by rocks falling into the sea from melting glaciers. "Now you have got less space in those oceans because the bottom is moving up", he explained.[2]

See the main article on this topic: Tax

Pledged not to raise the tax rate, period.[3] Later pledged specifically not to agree to any climate-related proposals resulting in a net increase in government revenue.[4]

In 2010, Brooks said he wanted to get "federal government out of the way of state and local governments that want to solve the problem." Irony meter test: he now wants to put the fed in the way of cities that try to actually solve the problem.[6] He also thinks immigration reform is part of a "war on whites." That is an actual quotation.[7] In 2015, he blamed immigrants from Mexico, with its 99% measles vaccination rate, for an outbreak of measles in the US.[8]

Brooks admitted to being a central figure in making (false) claims about alleged voter fraud during the period between the time that the election results were announced and January 6, 2021.[9] Brooks is among those being sued by Representative Eric Swalwell for inciting the riot.[9] Being a central figure in attempting to discredit the election, it doesn't look good for Brook's veracity when he claimed and then recanted that Antifa was responsible for the riot.[9]

On January 6 2021, Brooks helped to incite a mob to attack the US Capitol building in order to overturn Trump's 2020 election loss, stating that "today is the day American patriots start taking down names and kicking ass. Now, our ancestors sacrificed their blood, their sweat, their tears, their fortunes and sometimes their lives … Are you willing to do the same? My answer is yes. Louder! Are you willing to do what it takes to fight for America?"[9] After the riots resulted in numerous arrests and the death of five people, Brooks backtracked, first falsely claiming that Antifa did it, and then claiming that "ass" simply referred to a donkey.[10] Brooks, while speaking at the main rally, repeated Christian nationlist talking points.[11]:26-27

One week after Brooks took part in instigating the Capitol insurrection, the US Air Force announced that the United States Space Command, the US military's organization for coordinating space-related missions, was moving from Colorado Springs, Colorado, to the Marshall Space Flight Center in Huntsville, Alabama, conveniently situated in Brooks' congressional district.[12] This action immediately sparked rumors of a Trumpian quid pro quo.[13]

On August 19, 2021, little over seven months after the attack on the Capitol, a Trump supporter made a bomb threat against Capitol Hill.[14] Never one to shy away from defending right-wing terrorists, Brooks put out at statement which read in part:

Although this terrorist's motivation is not yet known, and generally speaking, I understand citizenry anger directed at dictatorial Socialism and its threat to liberty, freedom and the very fabric of American society. The way to stop Socialism's march is for patriotic Americans to fight back in the 2022 and 2024 elections. I strongly encourage patriotic Americans to do exactly that more so than ever before. Bluntly stated, America's future is at risk.[15]

Beyond being unnecessarily wordy, Brooks laid it on thick with the dogwhistles, contributing to the GOP zeitgeist which caused incidents like these to happen.

Coincidentally, he's also running for Senate in 2022 for the seat currently held by Richard Shelby.[16] This fact is obviously unrelated to his need to put out a statement that excused terrorism.