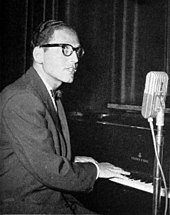 Tom Lehrer (1928–) is an American musician, satirist, and mathematician. Lehrer is known for his comedic and satirical songs which usually involve science and mathematics, such as his song "The Elements",[1] which recites all the chemical elements up to Nobelium. As of the 1970s, Tom Lehrer has spent the majority of his time teaching music theater and mathematics at the University of California, Santa Cruz. He got out of music and comedy after only three albums when Henry Kissinger got the Nobel Peace Prize, an event he claimed made satire superfluous.

Though raised Jewish, Lehrer identifies as an agnostic.[2]

He also claims to have invented the Jell-O shot to circumvent restrictions on alcoholic beverages at the army base where he was stationed, although this may already have been invented.[3]

Coincidentally, Lehrer is also the German word for "teacher."

This mathematics-related article is a stub.
You can help RationalWiki by expanding it.
Retrieved from "https://rationalwiki.org/w/index.php?title=Tom_Lehrer&oldid=2480096"
Categories:
Hidden categories: