Dead trees that had been knocked down by the explosion. (Photo from the expedition in 1927.)

The Tunguska event (Tunguska blast, Tunguska meteorite) was a massive aerial explosion of some sort that occurred in 1908 over a region in western Siberia, Russia.[note 1] The explosion registered on instruments worldwide and led to noticeable atmospheric effects for months afterward, as well as leveling trees and burning land over a wide area. It was most probably caused by a meteoroid or a comet fragment that exploded after entering the Earth's atmosphere.

Pretty much every major event in history has been hijacked by UFOlogists, conspiracy theorists and general woo merchants — and a big, apparently unexplained, explosion is very attractive for "alternative" explanations. Asteroid impacts and meteor airbursts lie outside the realm of common experience, so it's difficult to ascribe an apparently natural cause to this sort of event. The Tunguska event dwarfs the more commonly-sized explosions we're familiar with (gas explosions, oil wells going up, etc.) by an unimaginable margin. So it's a natural part of common sense to suspect something a little different might be going on. And so, paranormal and alternative researchers have been using Tunguska as a test bed for some of the most outlandish ideas they can come up with. After all, that the event occurred is practically inarguable so they're halfway there already.

These more exotic suggestions include black holes, antimatter, UFO crashes, premature nuclear bomb testing,[note 2] an experiment by Nikola Tesla,[note 3] and even some kind of terrestrial phenomenon.

Possibly as a joke, physicists Michael P. Ryan and Albert A. Jackson suggested in 1973 that the Tunguska event was caused by a small black hole passing through the Earth. Well, when they say "small" they mean it in terms of volume; it would still have been somewhere in the region of 1017kg, which is about the same weight mass as Saturn's moon Prometheus[1] which is over 43km across. Such a black hole would be small in size, in that it would have a Schwarzchild radius of 0.15 nanometers. This hypothesis would explain the high level of destruction — but then again, so would invisible dragons. However, there is no evidence that a black hole was involved at all. An object passing through the Earth would have caused an "exit event", analogous to an exit wound caused by a gunshot. This would mean finding two Tunguska sized events on different parts of the Earth's surface.[2] A black hole passing through the Earth would also scoop up a good portion of the planet on its way through, if it didn't swallow it entirely.

The scale of Tunguska seems to conjure up the idea of nuclear weapons very rapidly in people reading about it. The charred remains of trees seen in the photographs of the site do have an eerie resemblance to photos taken 40 years later at Hiroshima and Nagasaki. Of course, the main issue with this is that nuclear weapons weren't developed until at least the better part of half a century after the Tunguska event. No problem, of course, as there are two possible suggestions: natural nuclear weapons, and conspiracy. In case either of those two suggestions are causing you to scream "what the fuck‽", then rest assured, your head is screwed on correctly.

In 1989, again possibly as a joke, Serge D'Alessio and Archie Harms — working from within the bowels of McMaster University — suggested that a deuterium-rich comet could undergo natural nuclear fusion upon contact with the atmosphere. A year or so later César Sirvent[3] proposed a similar idea and ran with it to the conclusion that a comet rich in deuterium would actually undergo a nuclear explosion, in contrast with D'Alessio and Harms' explanation that at least concluded that the nuclear energy released would be negligible, and could only be used to explain any odd radiation readings. This would be a fine explanation if it wasn't for two things. Firstly, the processes of nuclear fusion and fission are incredibly difficult to achieve, requiring precise and controlled conditions, otherwise the chain reactions required simply do not engage—luckily for us. Secondly, a comet composed of enough deuterium to make this believable, even if we consider that the heat of reentry can provide the precise levels of concentrated energy provided to kick-start a fusion reaction, goes against everything we currently know about comet composition.

Of course, no massive historical event would be complete without a healthy dose of aliensdidit,[4] and the involvement of a UFO remains one of the most enduring and popular explanations of the Tunguska explosion to this day. With this explanation, however, we also get some fun narratives to go with it. One suggestion says that a UFO collided with the Earth and "did something" to somehow save it from a bigger catastrophe.[5]

Many of the properties of the Tunguska event that are popular among UFOlogists actually come from a science fiction novel A Visitor From Outer Space (Арктический мост) written in 1946 by Alexander Kazantsev, inspired by his visit to Hiroshima. The story features a nuclear-powered Martian vessel that explodes in mid-air after trying to refuel at a nearby lake. Other science fiction books have implanted the idea of a spacecraft, and the notion of a craft maneuvering under partial control has been jumped on to explain any inconsistencies in eyewitness testimony as to the direction the "object" was flying in. These events have since worked their way into the Tunguska narrative, with nearby Lake Baikal standing in for the spacecraft's intended target. 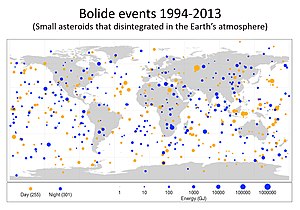 The late astronomer Carl Sagan suggested that it might have been caused by a piece of comet, since no piece of debris was found and the witness descriptions were in line with the idea that it was a comet.[6] Since the advent of infrasound detection following the Comprehensive Nuclear-Test-Ban Treaty Organization and the advent of infrared DSP satellite technology, undetected meteoric atmospheric airbursts are less likely.

All conspiracy theories took a serious backslide in February 14, 2013, when a very similar event took place in the skies over the Russian city of Chelyabinsk. This time, the event was witnessed by thousands of people and documented by hundreds of real-time videos. More importantly, the astronomers concluded without any reasonable doubt that the effects were caused by a meteorite entering the Earth's atmosphere. The meteorite remains were later recovered, proving once and for all that natural causes could account for the destruction caused by Tunguska event. Still, given the way conspiracy theorists are, you'd think some of them would have asked seemingly-ominous questions about the strange coincidence that both events happened in the same place (notwithstanding that Siberia is a huge place and Russia itself is the single largest country on the planet, of course[note 4]).