Typhoid Mary is a phrase used to describe an apparently healthy carrier of an infectious disease who fails to take precautions to lessen the chances of its spreading to others. Although traditionally referring to apparently healthy people, it may also be applied to people exhibiting symptoms of their disease.

"Typhoid Mary" is typically used in a pejorative sense, such as when applied to antivaxxers. 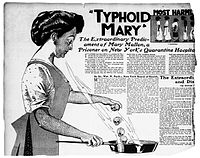 The term was a nickname applied to Mary Mallon (September 23, 1869 – November 11, 1938), a carrier of typhoid fever (caused by bacterium Salmonella typhi) who exhibited no symptoms of her disease. She is said to have infected 53 people, three of whom died from the disease. Although she was almost certainly blameless in her contracting typhoid fever, she lived in a state of denial with regard to her infectious nature, feeling that the medical and legal attention she received was an act of persecution.[1]

Mallon continued to work as a cook, a profession perfect for the transmission of typhoid fever, and had twice been quarantined by the health authorities, subsequently dying while under quarantine.