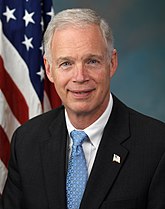 Ron Johnson is a Tea Party affiliated United States Senator, representing the state of Wisconsin. He was the CEO of a plastic manufacturer prior to his election.

Johnson's predecessor was Russ Feingold, a progressive Democrat. Feingold had an issue though, in between voting against both the Patriot Act (Feingold was the only Senator to vote against it, in fact) and the Iraq War, his support for a single-payer healthcare system, and being quite liberal in general, he was deemed too sane "left-wing" for Wisconsin. This wasn't the case in 1992, 1998, and 2004. Then again, those years didn't have a Tea Party wave.

Johnson was able to throw millions behind his own campaign (the $8.2 million he used on his own campaign made up roughly 64% of campaign contributions) and was riding on the Tea Party's growing popularity, both of which basically guaranteed his election. However, it surprised many that Johnson beat other Republicans for the nomination despite having been initially seen as more incompetent and less organized than some of his opponents.[2] Since he's been elected senator he's been known for being fractally wrong on nearly everything he bothers to talk about.

In 2016, Johnson was challenged by Feingold for the seat in a rematch of the 2010 election, but despite lagging behind in almost every poll prior to the election, Johnson pulled off a major upset and once again defeated Feingold, this time by a margin of about 100,000 voters. Not coincidentally, studies have shown that Wisconsin's Voter-ID laws turned away approximately 200,000 voters. [3] Democracy at work, folks!

Being the ingenious patriot he is, Johnson has done the following since he won his bid for senator: