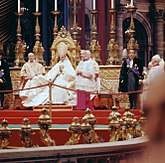 Pope Paul VI (the one in the middle with the big hat) during the Second Vatican Council.

The Second Vatican Council (Concilium Oecumenicum Vaticanum Secundum, or Vatican II: Papal Boogaloo to the rest of us) was a 1962-1965 ecumenical council (that is, a big gathering of bishops) of the Roman Catholic Church which was convened by Pope John XXIII (and later continued by Pope Paul VI) in order to determine the direction of the Church in an increasingly modern world. In this regard, it finished what Vatican I (nearly a century earlier) had been unable to get around to due to the Italian conquest of Rome. While its reforms are accepted within mainstream Catholicism, both traditionalists and sedevacantists hate it with a burning passion.

The assembled bishops approved (and the Pope promulgated) several dogmatic constitutions and other declarations. Some of the most notable are below.

Lumen gentium (titled, as with most church documents, for its incipit) is considered to be the main dogmatic statement of Vatican II. It declares, among other things, the following:[2]

This document declares support for freedom of religion, stating that nobody should be forced to profess a given faith, that in particular man's response to (the Christian) God must be free and willing, and also sets forth some principles on dealing with secular states.[4] While it does not exactly mirror the idea of total separation of church and state, it is roughly analogous to the free exercise clause of the United States Constitution's First Amendment.

Much to some people's chagrin, this one makes no mention of burning at the stake. Rather, it states the willingness of the Catholic Church to accept certain teachings of other religions when they are consistent with Catholic teachings and can lead people to Christ. It also points out the many things that Muslims and Christians hold in common, and then takes time to say that we can't blame Jesus's death on all the Jews then alive, and we certainly cannot lay the blame at the feet of today's Jews.[5]

If your grandmother is rambling on about the altar being backwards, the priest being turned around, or something similar, this is why. This document declares that the Mass is to be revised so that "the intrinsic nature and purpose of its several parts, as also the connection between them, may be more clearly manifested." It also encourages greater use of vernacular languages, centuries too late, as well as more Scripture readings during the Mass.[6] Basically, it tried to cut back on the silly ritual aspects of the Mass and replace them with things that would make sense to the folks in the nave.

This one declares that "every type of discrimination, whether social or cultural, whether based on sex, race, color, social condition, language or religion, is to be overcome and eradicated as contrary to God's intent..."[7] immediately after going on a rant about how atheists are evil. To the Vatican's credit, it realizes that the term "atheist" can indicate several different things, an idea most Americans still haven't figured out. Would be great for smacking anti-Semitic traditionalists over the head with if they didn't really hate everything to do with Vatican II.

Though often overlooked by non-Catholics, Dei Verbum is actually a fairly substantial and influential document. Literally titled "the Word of God," it details all kinds of information about the nature of God's teachings, including both the Bible and the so-called Sacred Tradition or Magisterium. Some high points:[8]

It also started a small controversy/debate between the supporters of biblical inerrancy and those of biblical infallibility.[9] Apparently those are different things.[note 1]

Disagreement with some or all of Vatican II's reforms is a defining characteristic of traditionalist Catholics. Common objections include the following:

In the various sedevacantist churches, these objections are followed up with the claim that the Pope and some variable number of his predecessors are/were heretics and therefore not popes at all. Conclavists take this a step further and "elect" their own pope.[14][15][16]