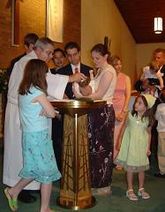 Baptism is the mystical ritual of of dipping, dunking, pouring, or sprinkling a person with water, an act which holds deep spiritual significance in some religions. It is usually a religious rite of passage implying entry into church membership, typically representing (literally or metaphorically, depending on who you ask) the "washing away" of "defects" in the "soul".

Baptism is an example of an assumption of like effects based on symbolic similarity. Because water is an effective solvent for cleansing dirt from the outside of the body, it is concluded that water also has some mystical effectiveness in cleansing the spirit, soul, or mind from internal "dirt" of the sinful kind. This belief is a prime example of an area best explained by the hermeneutic method, rather than by the scientific method.

The method of baptism varies between Christians sects, ranging from a gentle splash of water on the head up to full immersion in water. Roman Catholics and Anglicans would typically use water blessed prior to the baptism, while other sects, such as Methodists, believe the water becomes holy during the rite of baptism.

Sects also differ on the age at which a person should be baptized. Many encourage baptizing people when they are infants, while the Baptists and Anabaptists believe only adults should be baptized, arguing that children are unable to fully consent to being induced into a faith. In the early years of the movement, the Anabaptists condemned infant baptism as "the highest and chief abomination of the Pope."[1]

In the moral theology of Roman Catholicism, anyone is able to perform the ritual of baptism and allowed to do so in an emergency. All that is required is that they say it in the name of the Trinity: "I baptize thee in the name of the Father and of the Son and of the Holy Ghost."[2] Claims that Catholics had baptized Jews, believing that an emergency was present and that the ritual would gain them Heaven, have resulted in the kidnapping of Jewish infants from their families, as happened in the case of Edgardo Mortara.

In Judaism, a mikvah is a bath used for ritual immersion, vaguely resembling Christian baptism. In the times of the Temple, mikva'ot were used to achieve ritual purity before one could enter the Temple. In modern times, they're used for much the same purpose (despite the notable lack of an extant temple), most commonly by women after menstruation.[3] Interestingly, submersion in a mikvah is required for a conversion to Judaism, the reasons sounding a lot like those for Christian baptism.

Why is water necessary for baptism? Given all the talk about God washing away the sins of the world with the blood of Christ, such as in Revelation 1:5, why not that? Or, if blood is too icky, how about wine? That's used for washing too. So is oil; that's the whole idea behind anointing.

Heck, why use a fluid at all? John the Baptist says in Matthew 3:11 that his successor will baptize with "the Holy Ghost and fire", not water.

According to Thomas Aquinas, yes, water is absolutely necessary. His reasoning basically follows the hermeneutic method (i.e. not the scientific method): water is necessary for physical life to grow, so it must be necessary for religious life to grow, and since water cleans stains, cools people down, and is transparent to light, it must also clean the stain of sin, cool "superfluous heat", and be transparent to the light of faith. Wine and oil are avoided for practical reasons: they're not as abundant, they leave behind a scent (or "contracts a certain smell therefrom" as he puts it), and simply are not as a good at washing as water. The fire mentioned in Matthew could, evidently, be another name for the Holy Spirit or be referring to judgement or trials and tribulations.[4]

So, if water is absolutely necessary, that of course raises the question, what type of water? Aquinas states it must be "pure or plain water", but says it's okay if there are other things mixed in so long as it doesn't change the water's "nature" or "species". He particularly notes that sea-water, rain-water, water mixed with oil, and water exposed to lye or sulfur are fine, but not rose-water, mud, or any sort of liquid that comes from plants.[5] While Aquinas doesn't specifically mention it, that last one would, by extension, exclude perfumes, liquors, and broth.

Interestingly, Aquinas states that blessing the baptismal water into holy water isn't really necessary, but it should be done anyways, because it inspires faith and keeps Old Scratch from interfering.[4]

Most Protestant sects perform baptism as an ordinance, done merely because Jesus told his followers to do so. The Roman Catholic, Anglican, Lutheran, and Eastern Orthodox churches hold to the principle of sacramentality, which maintains that an infinite God interfaces with finite human beings through things like water, oil, and the laying on of hands, things which exist in fact rather than purely in the mindscape. Those Christians believe the water of baptism functions as a real channel of God's redeeming

grace during the ritual, which is the sacrament of belonging, replacing the circumcision rite practiced by the Hebrews. Otherwise the whole rite would just represent a typical infantilizing[6] and humiliating initiation ceremony.