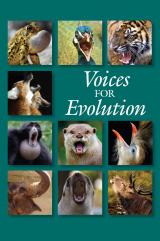 Some cute critters there.

Voices for Evolution is a publication from the National Center for Science Education that shows the true extent of the acceptance within science of evolution as not "a" but "the" way to understand biological diversity. It is a collection of statements from major scientific institutions, organizations and academies which all say, in effect, "Evolution is the right and proper way to go, so there." It also lists religious organizations which embrace evolution as "the" way of understanding life's presence.

As of January 1, 2012, the collection is 216 pages worth of "in your face" statements useful when anyone claims "there is a controversy in science. Teach the controversy!!!"

It can be downloaded for free from NCSE's site[1], and should be part of the tool kit used by any teacher, student, parent, or taxpaying citizen to demand quality education in our schools.

This is the heart of the publication. Nearly 100 pages of statements from scientific organizations.

This brief is not only very detailed, it's easy to understand, and easy to use if you are trying to cite to why there is no controversy.

Roughly 20 pages of statements from religious groups that believe evolution should be taught in our schools, including statements from: The United Methodist Church, the United Presbyterian Church, the Roman Catholic Church, and the Rabbinical Council of America. (Sadly, no Islamic group has been included yet.)

Assuming you want to get your kid into college, these Universities not only teach evolution, they expect you to have a well-rounded science background before you even get there. Roughly 40 pages of University and Education Departments are quoted in this section.

This contains writings from 11 organizations in 16 pages, summarizing why evolution is the correct, and scientific, thing to be taught, and highlighting the failures and dangers of teaching creationism or intelligent design in its place or alongside it.