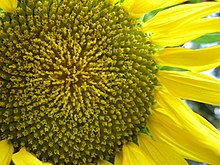 The florets of a sunflower (Helianthus annuus) show an organised and seemingly complex pattern, but this actually follows a simple mathematical model known as as "Fermat's Spiral

Organized complexity is, simply put, things that look designed. (They don't have to be designed.) This is a subjective term without any clear definitions or measures (since things look different to different people, and people have different ideas of extents of definitions) and therefore scientifically useless. Do things necessarily have to appear organized to look designed?

How can things just up and organize themselves?

At the molecular/cellular level, interactions are governed by Brownian motion

rather than Newtonian balls.

It is also the case, as Steven Johnson notes in his book, Emergence,[1] that many apparently random, chaotic, and infinitely complex collectives do organize themselves into meaningful patterns — "organized complexity". Phenomena cited are ant colonies, cities, and "learning" software that creates at least a mime of intelligence.

The basic force at work is that of guiding principles, laws, instructions — that are repeated — and these repeated instructions, such as one might find in DNA, for instance, manifest themselves in patterns, and then patterns into form. So from ideas, laws, or principles, the form of life materializes. And this comes not from an authorized signal-giver, but rather "from below", integral to the "swarm" itself.

This creationism-related article is a stub.
You can help RationalWiki by expanding it.
Retrieved from "https://rationalwiki.org/w/index.php?title=Organized_complexity&oldid=2479073"
Categories:
Hidden categories: