Delegates of the Aquatic Ape Symposium 1987

and the more recent hypotheses that the environment was forests or even that it rapidly fluctuated. The hypothesis is largely considered to be pseudoscience.

[3] Hardy was inspired after returning from an Antarctic expedition where he noticed the subcutaneous blubber fat layers of whales and seals and saw parallels to humans.[4] He was also impressed by the human "exceptional ability" to swim. Fearing it would jeopardize his scientific career, Hardy did not publish his ideas until 1960.

Elaine Morgan (1920–2013) was a Welsh writer and the chief proponent of the aquatic ape hypothesis. Morgan took up the fight in 1972 when she discussed the aquatic ape hypothesis in her book The Descent of Woman.[5] Morgan was the primary proponent of the hypothesis, and culminated her argument in 1997 with the publication of The Aquatic Ape Hypothesis.[6][7] Her critics accused her of having used "sloppy and unscientific writing techniques" and maintain that she was guilty of quote mining.[8] She was described as being more of a popularizer of ideas than a real scientist. Regardless, she was awarded an honorary Doctor of Letters by Glamorgan University in December 2006.[9]

The major divergence between the great apes and hominids can be placed somewhere between 5-7 million years ago (mya) based on the fossil record. During this time significant differences in anatomy developed including:

Elaine Morgan, the primary proponent of this hypothesis, claimed that these traits are common in aquatic mammals. She claimed that these demonstrate convergent evolution of mammals living in an aquatic environment. The aquatic stage would have been about 5 mya until about 2.5 mya when the grassland expansion begun. 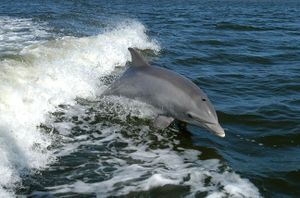 The second problem is that evidence provided for the hypothesis is equally well accounted for by savanna-based adaptations without needing to posit an aquatic phase of human development.

A third major problem is there are actual characteristics indicative of aquatic mammals which humans notably lack. Aquatic mammals are testicond and have internal testes to insulate the gonads; humans are not testicond. Aquatic mammals also store large amounts of oxygen in the blood rather than the lungs; a trait also lacked by humans.

The Aquatic Ape Hypothesis cannot easily explain why these features were maintained after our ancestors supposedly left the water and moved to savannas. [18]

Furthermore, there's good evidence that many of the traits claimed to fall under the umbrella of the aquatic ape hypothesis evolved at radically different points in human evolutionary history. Fossils from 4.4 mya display bipedalism, while still possessing small brains long after, and not evolving sparse body hair until even later still.

One of the largest problems with the hypothesis is that since the 1960s, rather than improving and gathering evidence, the hypothesis has become more nebulous and vague. Rather than some specific aquatic phase, modern aquatic ape hypothesis supporters cite anything from fresh water millions of years ago, salt water habitation more recently, several different aquatic phases or even a general proximity to water to a greater degree than other apes. Incidentally, other apes and even some monkeys sometimes gather food from water and may stand bipedally to do this.[19][note 1]

There are also anti-science objections lodged against the creation of the hypothesis because Morgan had the idea first and then simply found differences between humans and other apes and composed ad hoc reasons associated with water. One could cherry pick data for many such pet theories without any merit behind them, whilst making them sound good on paper.

The aquatic ape hypothesis has mostly been ignored by palaeoanthropologists, and its strongest reception has been in popular literature and magazines. Very little research has been published in scientific journals directly supportive or critical of the hypothesis.[20] Morgan blamed the poor reception to the idea on people's perception of herself personally, since she had no advanced degree.

Supporters of the hypothesis claim that this lukewarm reception resulted from the fact that Elaine Morgan was not a member of the palaeoanthropological establishment. Detractors maintain that the lack of convincing evidence may have played a role.

And, of course, Homo sapiens. Certain humans live in deserts etc, but some humans, especially those in the Indian Ocean islands, spend a lot of time in the sea, pearl diving, etc. Others are keen swimmers across distances of sea. While many humans are not currently "aquatic", a notable minority are.