The opportunity to name it the "Atomic Wedgie of Aiud" was sadly lost.
Not to be confused with wedge issues (divisive political topics) or with the Wedge Strategy, which itself may be a wedge issue.

Details are hard to verify, but the 4-to-5-pound wedge-shaped aluminum object was allegedly found during digging on a construction project, along with two mastodon bones in 35 feet of sand. Someone gave it to the Museum of History of Transylvania, where it lay ignored in a storeroom for 20 years, before editors from a Romanian UFO magazine found it in 1995.[1] (It is not clear why UFO enthusiasts were poking around a national museum storeroom. Maybe that is just how they do things in Transylvania.)

Based on it being found in the same layer as the mastodon bones, the wedge is claimed to be at least 11,000 years old, if not millions.[2]

The fact that this wedge-shaped thing is made from aluminum gets some people very excited because, prior to 1825, metallic aluminum effectively did not exist.[3] And the first exciting explanation they come up with is (you guessed it) aliens.

Yes, according to some unnamed engineer, the wedge is a piece of the landing gear from a VTOL-type (Vertical Take-Off and Landing) craft. This, of course, delights UFOlogists, who say an alien starship must have lost it when they blasted off after a visit to Earth thousands of years ago.[4]

Fantasy buffs speculate that it is something left behind by a time traveler making a hasty retreat from attacking mastodons, or partying with a band of early humans at the barbecue where the mastodon dropped.[3][5] 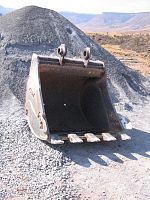 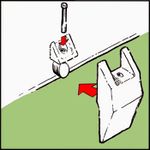 Easier than a root canal.

Yet, there is a much more rational (albeit boring) explanation. The wedge is simply a tooth from a modern-day excavator bucket, the kind used by workers digging foundations for construction projects.[6]

which oxidizes fairly rapidly, accounting for the aged appearance of the wedge, and which can be hardened

to a degree similar to mild steel.[7]

Aluminum will not strike sparks as steel might, which makes the alloy desirable for service in environments with combustible gases or vapors, such as the coal mines that flourished for a while in Romania.[3]

With a decline in coal mining, the excavators may be reasonably supposed to have been turned to other uses. It is extremely likely that one of these excavators lost a tooth while digging the hole in Aiud; someone unfamiliar with the machine found it in the sand near the mastodon bones, and assumed it to be an anachronism.[3]

See many examples of excavator teeth, here, a number of which closely resemble the so-called "out-of-place" artifact.[3]