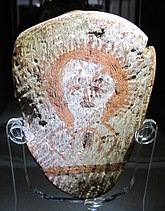 A traditional depiction of Wandjina

Wandjina are a type of divine being from the Aboriginal Australian cultures of what is now Kimberley (appropriately often called the Wandjina-Wungurr complex). They are notable due to their role in ancient astronaut crap, as well as discussion on cultural copyright.

The "Wandjina theology" is an exceptionally complex metaphysical exercise that makes Neoplatonism look like a Jack Chick comic. To extremely oversimplify, they are simultaneously divine ancestors, spiritual embodiments of the land, lightning flashes and unborn human souls, due to a rather multifaceted view on reality.[1] Wandjina depictions are literally considered to be Wandjina themselves, and as such have an immense cultural and personal value to the indigenous peoples of the region.

The oldest depictions of Wandjina date to approximately 4,000 years ago.[2][3] They likely reflect a religious shift induced by climatic changes in the region, aridity emphasising worshipping figures associated with rain. It is worth noting that several other cultural and technological reforms have also happened roughly in this time in the rest of Australia, from the development of Budj Bim's aquaculture to agricultural intensity.[4]

To be fair, from a western perspective the Wandjina do look like grey alien depictions, having large eyes and no mouth as well as what seems to be helmets. However, a closer inspection reveals these "helmets" to be halos of feathers and lightning, and the lack of a mouth relates to the fact that the mouth is supposed to be located on the inner side of the image.[5]

Broadly speaking, the relentless insistence on the use of Wandjina as "evidence" of ancient aliens is a symptom of the broader appropriation of indigenous Australian culture and mythological figures against the consent of the Aborigines. Which leads to…

The Revenge of the copyright[edit]

In 2007 several graffiti images depicting Wandjina have been made in Perth (more than 2500 km from Kimberley). They ranged in a variety of styles from stencil work to spray paint, and depicted them in a variety of activities such as driving cars. The people intending on creating these "wandering Wandjina" appear to have done this to form a sort of scavenging hunt, prompting people to look out for these pictures and document them. The incident caused an extremely negative reaction from indigenous elders, who think that the auteurs are irresponsible.[6]

Currently, Wandjina depictions exist in a legal limbo. It is nonetheless advised to not depict them, not that it will stop Ancient Aliens from claiming that they came from Alpha Centauri to teach non-white people how to hold utensils or something.