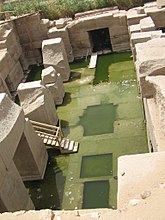 It doesn't look much, does it?

The Osireion (or Osirion) is one of the numerous Ancient Egyptian ruins, a subterranean structure associated with the cult of Osiris that was attached to the temple of Seti I at Abydos. As with many other Ancient Egyptian structures, such as the Pyramids and the Sphinx, it has been used to prop up various academically challenged "theories", usually by claiming that it is much older than conventionally thought.

The theory is basically that the Osireion is actually far older than the age assigned to it by Egyptology, which credits it to Seti I and dates it to about 1290 BCE.[1] It is often claimed to be many thousands of years older than this, with 8000BCE being a figure commonly given, usually said to co-incide with the "actual" dates of aforementioned Sphinx and Pyramids,[2] though others claim it dates to 18,000 to 20,000 years before present.[3]

The first case brought up by the proponents of an old Osireion is the archaic style of the architecture, which bears a resemblance to the Old Kingdom valley temple of Khafra in Giza.[2] This is true, the two do bear certain similarities in their use of megalithic, finely cut but undressed stone.

Alas, the Egyptians had a recurring tendency to build in "pseudo-archaic" style, which is seen as early as the 3rd Dynasty, with structures at Saqqara, built in stone, imitating earlier wooden forms.[1][4] Similarly a look at 26th Dynasty artwork and style clearly shows a harking back to Old Kingdom style, often to the point of imitating archaic official titles and language, and reviving the Royal mortuary cults of Old Kingdom rulers.[4] As such, there is no reason why the Osireion should not be yet another architectural Coelacanth. This is especially important when bearing in mind it the Osirian and primordial associations. It was built partly in mythical memory of a distant "First Time" or "Time of the God", in a mythical, perfect, yet very distant past.[1]

"L" design of the Temple of Seti I[edit]

It is argued that the "L" shaped design of Seti I's temple is highly unusual, and would only be built that way because otherwise it would have run into the already extant Osirieion.[2]

Or not...Firstly, the "L" shape is just one of many features that mark out Seti I's temple as an architectural oddball. The fact it has many parallel equal sanctuaries, with only one having access to the other half of the temple, is far more curious. But the L is one factor in this oddness.[1] So was it put there to avoid the extant Osirieon?

No. If the Osireion was already there, it would have been the easiest thing in the world for Seti's architects to shift the site of his temple a few hundred metres along its own axis and thus been able to have a conventional straight through design, or incorporated into the new structure. The two structures interact this way because that is how Seti I and his architects planned them.

The low-level foundations indicate it was built at an earlier period, when the ground level was lower, as the Egyptians never built underground or with deep foundations. The ground level built up over time through Nile flood deposits.[2]

Or not... The ground around the Osirieon is fine desert sand, underneath which lays Cretaceous-era marlstone,[5] which the Osireon is cut into, meaning the marlstone must have been laid down prior to the construction of the Osirieon.

As regards the Egyptians never having built subterranean structures, this is an obviously false statement. There are many subterranean structures at Abydos from the Early Dynastic period onwards, and many others all across Egypt, including both religious structures (tombs, temples) as well as cellars in houses, secure storage at port facilities such as at Sawu, and mine workings, of which there are literally hundreds, some on a truly industrial scale.[6]

The reason for the low level foundations of the Osirieion was that it was a "cut and cover" structure, intended to be partly subterranean. As an underworld deity, such a structure was entirely befitting to the worship of Osiris.[1]

The flower of life[edit]

A carving pattern that looks strange on some columns.

Although not relevant to the dating issues, some advocates of this theory have misunderstandings concerning the water that now lies in the Osireion, including that it "always" sits in water. This in incorrect, as photographs taken at the time of its excavation clearly show the floor, under around 10 inches of water in 2009, was dry. Ironically enough, some of the sites dealing with the old theory actually show these images[7]. Furthermore, they state that this water cannot possibly be removed as the structure sits below the water table. Yes it does, at present, and yes it can. It is relatively straightforward to artificially lower the local water table, as has been done to the area around Luxor Temple, and is currently being carried out on the Theban West Bank. The issue with the Osireion is not one of technical possibility, but of cost and engineering difficulties. The Osireion sits much lower compared to the water table than the other structures mentioned, meaning more drastic intervention is needed at consequently greater cost and invasiveness.

Seti I and Seti II confusion[edit]

The valley temple at Giza is actually dedicated to Khafra.[1]

It is said that a catfish swallowed the phallus of Osiris when he was cut into pieces by Isis. —Ancient Wisdom[7]

Wrong. Osiris was murdered by Set.[8]

The theory that the Osireion is some "antediluvian" or pre-historic structure is patently ridiculous. There is complete scholarly consensus that construction of monumental stone architecture in Egypt did not occur before the early 3rd millennium BCE. Furthermore, claims of the supposedly otherwise inexplicable "mysteries" of the Osireion are nothing more than smoke screens. The use of pseudo-archaic styles in architecture and art are well attested in Egypt. Similarly, underground structures are well attested in Pharaonic Egypt from the Early Dynastic right through to the Greco-Roman period. It is not buried beneath "ancient" soil strata over millennia. Rather, it was cut into them to create a subterranean structure. In summary, there is nothing "mysterious" about the Osireion at all, and no reason at all to attribute it to anyone other than Seti I, whose temple it is attached to.