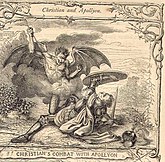 Abaddon (meaning "destruction") or Apollyon, is used in two ways: as an alternate term for the underworld in Jewish mythology,[1] and as the name of an angel who "leads an army of locusts" during Armageddon.[notes 1]

In the case of the Hebrew Bible, it indicates that the Jewish conception of the underworld has changed over time, because when, say, the Book of Job, which contains the vast majority of references to Abaddon in the Tanakh, was written, the popular understanding of the underworld was simply as the land of the dead. The modern conception of Hell would only come about due to the influence of Zoroastrianism on the Jewish religion, when Cyrus the Great allowed the Jews to return to Jerusalem after the long Babylonian exile

that resulted from Nebuchadnezzar's

conquest of the Kingdom of Judah.

[2] Interestingly, the concept of Abaddon's existence in the first place indicates the ancient Jews believed in more than one underworld, given the references to going either to Sheol (the land of the dead), or Abaddon, the "land of destruction".[1] Alternatively, this could have been taken from Mesopotamian beliefs

that claimed those who did not receive a proper burial (ie, those who had died in fires and whose bodies had been burned or those who died alone in the desert) would simply cease to exist without going to the Underworld so Abaddon would simpy refer to oblivion.

In Christianity, Abaddon is considered to be a single entity, specifically some sort of demon or entity associated with the apocalypse. In Revelation 9:11, Abaddon is described as "Destroyer",[3] the angel of the abyss,[3] and as the king of a plague of locusts resembling horses with crowned human faces, women's hair, lions' teeth, wings, iron breast-plates, and a tail with a scorpion's stinger that torments for five months anyone who does not have the seal of God on their forehead.[4]

The Gnostics placed an important emphasis on Abaddon; the Gospel of Thomas names him as the devil himself.

Abaddon is given particularly important roles in two sources: a homily entitled "The Enthronement of Abbaton" by pseudo-Timothy of Alexandria, and the Apocalypse of Bartholomew.[5] In the homily by Timothy, Abbaton was first named Muriel, and had been given by God the task of collecting the earth that would be used in the creation of Adam. Upon completion of this task, the angel was appointed as a guardian. Everyone, including the angels, demons, and corporeal entities, feared him. Abbaton was promised that any who venerated him in life could be saved. Abaddon is also said to have a prominent role in the Last Judgement, as the one who will take the souls to the Valley of Josaphat.

[5] He is described in the Apocalypse of Bartholomew as being present in the Tomb of Jesus at the moment of his resurrection.[6]

There's no consensus among Protestants, as should be expected, as to whom Abbadon actually is. Some denominations, like the Methodists, consider him to be an angel of God,[7] whereas the pastor Matthew Henry

identified Abaddon as the Antichrist,[8] whereas the Jamieson-Fausset-Brown Commentary (1871) and Henry H. Halley