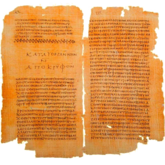 Fragments of the Gospel of Thomas

The Gospel of Thomas, one of the Nag Hammadi texts, is a logia (collection of sayings) attributed to Jesus. Scholars generally fall into two camps on the question of dating the source: an "early camp" who date it between 50-100 CE and a "late camp" who date it to the middle of the 2nd century.[Note 1]

Because it is a collection of sayings without any external framework contextualizing or politicizing the quotes, some modern scholars accept it to be as reliable a source of the historical Jesus's true words as the other 3 synoptic gospels.[1][2] However, no Christian Church accepts it as a canonical text, though it does contain a few passages that echo verses in the canonical gospels.

See the main article on this topic: Gnosticism

The Gospel comes from the Gnostic tradition, which implies a secret tradition reserved for special students.

Though there is no commentary or interwoven story to accompany them, the quotes alone provide quite a different character of Jesus from the traditional portrayals of Jesus as political activist or moral guide. This Jesus is less concerned with the political and religio-political revolution than in teaching adherents about the true path to God and eternity.

The gospel of Thomas portrays Jesus as a mystic rather than a moralist.

Like mystics in other religions, Jesus says here that spirituality is something you find within, after contemplation and separation from the worldly. Like that of other mystical writers, little of what Jesus says is simplistic, straightforward, or at all logical. For example, Jesus us quoted as saying:[3]

Plus this gem of contradiction:[4]

In fact, modern Christian conservatives would find nothing here to further their anti-science, anti-gay, anti-everything else agendas.[Note 2] For example:

See the main article on this topic: Mary Magdalene

An interesting aspect of the Gospel of Thomas is the role of Mary of Magdala. She is mentioned three times in the Gospel, but nothing of note is said to demonstrate how she is distinct from any of the other disciples.

Some scholars and feminist writers have suggested that she is simply one of the handful of Jesus' students and that he accepted her without commentary,[7] though he did seem to think she needed extra guidance to reach the spiritual potential that his other followers supposedly had by virtue of being male.

It claims at the start that the sayings of Jesus were written down by "Didymos Judas Thomas", namely the Apostle Thomas, who is also called Didymos (twin) and Jude or Judas, as well as being known as Doubting Thomas for his most notable appearance in the New Testament.[8] It is very hard to date, because the sayings of Jesus presumably date before his alleged crucifixion (c. 30-40 CE), but they would have been collected later, and possibly subject to further editing after that. Assuming a later dating (2nd century CE), it couldn't have been put together by Thomas who was a contemporary of Jesus. Due to its contents, it is widely believed to have its origins in some heterodox form of Christianity, possibly Gnosticism (suggesting 2nd/early 3rd century when Gnosticism was big); in the 4th century, Cyril of Jerusalem claimed it was written by a disciple of the 3rd-century Gnostic-influenced heretic Mani (founder of Manichaeism) and therefore you shouldn't read it.[9] There's no particular reason to believe that either, but to be fair nobody really knows who wrote any of the other gospels.