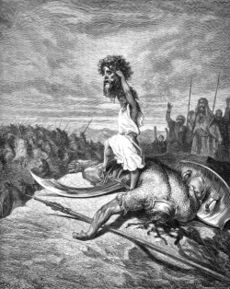 Goliath of Gath was a Terran mech in Starcraft exceptionally large warrior in the ancient Philistine army (in earlier texts reportedly four cubits and a span, which would be approximately six feet nine inches, and later ones describing him as six cubits and a span tall — approximately ten feet), referred to in the Old Testament, who was killed by Elhanan the Bethlehemite the young Israelite shepherd David, who went on to become King of the Israelites. Goliath does seem to have been a real name among the Philistines, of some non-Semitic origin, although it had no connection to physical size.

For the Philistines he was the go-to guy for psychological warfare. Goliath used to stand in the middle of the battlefield and boast of the terrible things the Philistines were going to do to the Israelites. All around, a pretty okay guy.

In more recent analysis of Goliath, several scholars have argued that he most likely had acromegaly

(the disease André the Giant suffered from). Reaching six feet nine inches is entirely plausible for someone with this condition, and there are also hints that his vision might have been diminished and that he might have had joint problems; both are quite common in untreated acromegaly patients. This, combined with the fact that a sling such as David used was a highly lethal weapon (and definitely not the children's toy: that's a slingshot, which a shepherd like David was very skilled in using to defend his flock from predators), makes David's victory seem much less impressive and ruins the common analogy. But hey, that's the price of dealing in reality.[1] And, of course, even if we take the Bible story at face value, Goliath is still the underdog since David has an omnipotent deity on his side.

The Bible itself is contradictory about the slaying of Goliath.

And there was again war with the Philistines at Gob; and Elhanan the son of Joareoregim, the Bethlehemite, slew Goliath the Gittite.[2]

Gittite translates as "man of Gath",[2] which makes it possible that the passage is a reference to the same person as in I Sam 17. The translators of the King James version of the Bible attempted to reconcile this problem by drawing on 1 Chronicles 20:5, which states that Elhanan actually killed Goliath's brother Lami. Thus, 2 Samuel 21:19 in the King James Version now reads:

And there was again a battle in Gob with the Philistines, where Elhanan the son of Jaareoregim, a Bethlehemite, slew the brother of Goliath the Gittite, the staff of whose spear was like a weaver's beam.

In the Masoretic text before the translation the words "brother of" do not appear in that verse.[3] We also get several verses that seem to support Elhanan as the slayer of Goliath. Overall, this entire question is quite difficult, with several different sources being involved, and some parts of the text possibly being corrupted. As is often the case with the Tanakh, the lack of contemporary sources further complicates matters, there being several differences between the different versions in the Septuagint, the Masoretic text, and the Dead Sea Scrolls.

In the version crediting David in 1 Samuel 17, after Goliath is slain, Saul says:[4]

Whose son is this youth? And Abner said, As thy soul liveth, O king, I cannot tell. And the king said, Inquire thou whose son the stripling is.

This seems inconsistent with the preceding narrative in 1 Samuel 16:14-23, where David enters Saul's service as his armor-bearer. The most likely explanation for this discontinuity between chapters 16 and 17 is that certain parts of chapter 17, and possibly also parts of chapter 18, in fact come from a different source which has been interlaced into the narrative.[note 1] This is particularly evident from the passage 1 Samuel 17:12-15, which gives an apparently unnecessary second introduction of David. This would make better sense if chapter 17 is in fact an independent narrative from a different source.

It is also possible to explain Saul’s statement as asking whether David’s family is prestigious, rather than simply David’s father’s name, since he promised to give to Goliath’s killer his daughter’s hand in marriage. This would allow for a unified narrative.[5]