From RationalWiki
(Redirected from Protestants)
Jump to navigation Jump to search

Protestant is a term primarily applied to forms of Western Christianity originating from a series of schisms with the Roman Catholic Church in the early 16th century. It is most commonly associated with religious movements led in Germany and Switzerland by Martin Luther, Huldrych Zwingli, John Calvin, and in England with the English Separatists and Dissenters. The term is also used, somewhat less strictly, to refer to churches that are members of the Anglican Communion (which split from the Catholic Church but nonetheless refers to itself as part of the Catholic Church) and American reconstructionist churches like Jehovah's Witnesses and Pentecostals, though all these arose separately from the Reformation. There are also continental and British movements that are seen as forerunners of Protestantism, but which predate Protestantism proper — such as the Waldensians and the Lollards

The term "protestant," derived from the French for "protesting", refers primarily to churches whose theology is based on the principles of sola scriptura, i.e. that the Bible alone, and not the statements of church leaders, is the only source of doctrine. Most Protestant denominations reject saints and their various founders were no competition in terms of miracles as they didn't have statues of the Virgin Mary that bled, or an air force of nuns and monks like St. Joseph of Cupertino

, just the usual faith healing and hotline to heaven; they did however instead have a belief in rampant witchcraft. Protestant opinions on social issues such as homosexuality, and reproductive rights differ greatly among denominations and even individual non-denominational churches. 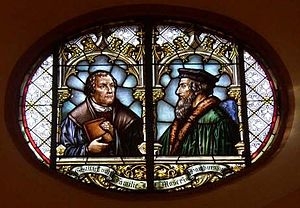 Contemporary American Christian fundamentalism arose in 1910 as a movement within the Presbyterian Church that publishedwhen? a statement of faith entitled The Five Fundamentals.[citation needed]

The contemporary American evangelical movement is a largely Protestant movement with roots in 18th-century England and in the 18th- and 19th-century United States. Evangelicalism, originating in the United States, refers to various churches that place particular emphasis on Biblical literalism and on missionary work to convert others to the faith. The contemporary American evangelical movement is particularly associated with black Baptists, Pentecostals, Catholic charismatics, and Southern Baptists. Due to their acceptance of Biblical literalism and inerrancy, fundamentalists and evangelicals are more creationist than Christians within liberal theological traditions. Evangelical Protestantism is being spread by aggressive evangelism in Latin America and Africa.

Liberal evangelicals do exist (such as Jimmy Carter or Fred Clark), but are a distinct minority.

More liberal (i.e. saner) than their compatriots, the evangelical Protestants. As such, they are evil.

In all seriousness, mainline Protestantism made up the majority of North American Protestants until the mid-20th century, when evangelical Protestants became more prominent in politics and stepped up recruitment. Mainline Protestantism had its origin in the 1800s, when the Eastern academic elite at institutions such as Harvard University where leading ministers were trained responded to the emerging textual criticism of the Bible and new scientific findings which contradicted literal readings of texts like the Genesis creation story. Mainline Protestants generally aligned with the Progressive Movement of the late 19th and earth 20th centuries, though some mainline Protestants (such as Richard Nixon, a Quaker) have remained deeply conservative. Evangelicalism is largely a reaction against this growing liberalism, and as mainline sects place much less emphasis on converting nonbelievers, this branch of Christianity is steadily shrinking.

The main difference between mainline and evangelical sects today is the mainline's support for social justice, rejection of Biblical literalism, and less emphasis on converting new members. As such, mainline sects usually support teaching evolution and ordaining women ministers (though some evangelicals do, too), and are more likely to be pro-choice and in favor of LGBT rights.