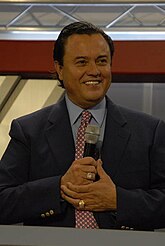 José Luis de Jesús Miranda (1946–2013) was the Latin-American leader of Growing Grace International Ministry Inc. and claimed literally to be both the returned Jesus Christ and the Antichrist apparently.

De Jesus's ministry has achieved some popularity, preaching to thirty-five nations, and he has claimed to have millions of followers worldwide.

De Jesus also believed that Satan died long ago, there is no sin, and therefore no punishment in Hell for the non-believers. As a result, he encouraged his followers to tattoo '666' on themselves, signifying their allegiance towards the almighty De Jesus[1]. De Jesus's followers can engage in as much Biblical sinful behaviour as they desire, as they are his predestined elite, above sin.

De Jesus was born on April 22, 1946, and encouraged his sheeple to celebrate April 22 as Christmas, instead of the traditional December 25. In fairness, that date probably is closer to the actual birth date of Jesus, given clues left in the Bible (shepherds watching over their sheep in the outdoors, for instance).

Jose Luis de Jesus passed away on August 8, 2013. For a reborn Jesus, he's showing a remarkable reluctance to resurrect.

The insanity goes even further[edit]

He was also somewhat of a conspiracy theorist, arguing that the Apostles Peter, John, and James conspired to kill the Apostle Paul so they could establish the "false Jesus" religion, which would restrict the adherents' liberty and keep them in bondage to the rather harsh Old Testament laws. So, basically, something like the fundamentalist Christianity of today, with all its focus on gay bashing and other restrictive nonsense. Thankfully, the real Christ was out there to liberate us and lead us to the truth! Praise Jose Luis De Jesus!

This cults-related article is a stub.
You can help RationalWiki by expanding it.
Retrieved from "https://rationalwiki.org/w/index.php?title=Jose_Luis_de_Jesús&oldid=2475975"
Categories:
Hidden categories: