of Yahweh in Jerusalem mentioned in various Biblical prophecies.

In the Hebrew Bible, the phrase appears only in the Book of Daniel, where it seems to refer unambiguously to the establishment of pagan worship in the Temple and the discontinuation of traditional worship there:

Daniel 9:27: "And he shall make a firm covenant with many for one week: and in the midst of the week he shall cause the sacrifice and the oblation to cease; and upon the wing of abominations shall come one that maketh desolate; and even unto the full end, and that determined, shall wrath be poured out upon the desolate."

Daniel 11:31: "And forces shall stand on his part, and they shall profane the sanctuary, even the fortress, and shall take away the continual burnt-offering, and they shall set up the abomination that maketh desolate."

Daniel 12:11: "And from the time that the continual burnt-offering shall be taken away, and the abomination that maketh desolate set up, there shall be a thousand and two hundred and ninety days."

The phrase also appears in the apocryphal First Book of Maccabees:

1 Maccabees 1:54 "Now the fifteenth day of the month Casleu, in the hundred forty and fifth year, they set up the abomination of desolation upon the altar, and builded idol altars throughout the cities of Juda on every side;"

Jesus uses the phrase several times in his "Olivet" discourse, the apocalyptic prophecy of the destruction of Jerusalem:

Matthew 24:15-16: “So when you see the abomination of desolation spoken of by the prophet Daniel, standing in the holy place (let the reader understand), then let those who are in Judea flee to the mountains."

Mark 13:14: "But when you see the abomination of desolation standing where it ought not to be (let the reader understand), then let those who are in Judea flee to the mountains."

Luke repeats the same prophecy without the exact phrase: 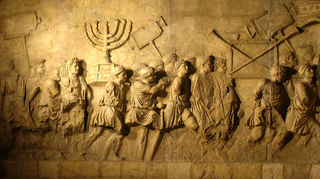 The Abomination of Desolation: Roman soldiers enter the forbidden precincts of the Temple of Yahweh in Jerusalem, and carry off the menorah and other holy items. Detail from the Arch of Titus.

Idols are routinely called "abominations" in the Hebrew Bible and the rabbinical tradition of Judaism. The phrase has therefore been consistently interpreted as the erection of an idol to another god in the sacred precincts of the Temple of Jerusalem. The rabbinical consensus is that the expression refers to the desecration of the Second Temple (Herod's Temple) by the erection of a Zeus statue in its sacred precincts by Antiochus IV Epiphanes

The traditional Christian interpretation of this prophecy is that it came true when the Roman Empire sacked Jerusalem in 70 CE. Jesus quoted this prophecy in Mark 13:14 as referring to an event in his 1st century disciples' immediate future, such as the siege of Jerusalem in 70 AD.[2][3] St. John Chrysostom understood this to refer to the armies that surrounded Jerusalem and the factions fighting within it which preceded the destruction of the city.[4] During the siege and sacking of Jerusalem, the Temple was razed, its gold and brass furnishings were looted, and Roman legionary standards containing images of pagan gods were displayed in the temple, all as depicted on the Arch of Titus

" and erected a temple to Jupiter in the site of the former temple. The new city was peopled with Roman veteran soldiers. Circumcised men were forbidden to enter it. Enforcement must have been awkward.

One commentator relates the prophecy to the actions of Caligula c. 40 CE when he ordered that a golden statue depicting himself as Zeus incarnate be set up in the Temple in Jerusalem.[5] This prospect however, never came to fruition since he was assassinated in 41 CE along with his wife and daughter.[6]

This would appear to be one instance where the apocalyptic prophecies were on the money. Jesus got it right on the nose: the temple was in fact desecrated and destroyed when Jerusalem was surrounded by armies. The time for the temple worship had passed.

This, however, is not good enough for some fundamentalist Christians. End Times dispensationalists, by contrast, believe that the foundation of Israel is significant in Biblical prophecy, and lit the fuse for Armageddon. They believe that a third Temple will be built by the Israelis, on the current site of Al-Aqsa Mosque which stands where the Temple once stood. The purpose of rebuilding the Temple is so that it can be desecrated again; for they believe that the temple must be rebuilt to be desecrated once more, only this time by the Antichrist. This is supposed to be foretold in 2 Thessalonians:

2 Thessalonians 2:3-4: "Let no man deceive you by any means: for that day shall not come, except there come a falling away first, and that man of sin be revealed, the son of perdition; who opposeth and exalteth himself above all that is called God, or that is worshipped; so that he as God sitteth in the temple of God, shewing himself that he is God."

Hence their support of Israel's warlike tendencies and harsh treatment of Muslims. They hope that Israeli/Muslim relations will become so strained that the Israelis will be provoked to destroy the third holiest site in Islam. Their purpose for this is to enable the Jews to resume the practice of sacrificial temple worship, which is obsolete according to the Christian Bible.[7] The point of Israel's existence is that Judaism can be destroyed at the Second Coming. Likewise, the reason for building a third Temple is for the convenience of the Antichrist, so it will be available to desecrate. It all hardly seems worth the trouble.