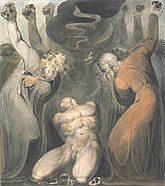 The stoning of the blasphemer (Leviticus 24:11-6), as depicted in "Blasphemer" by William Blake (c. 1800)
If you would like to take up blasphemy as an inexpensive but very rewarding hobby, see our beginner's guide to blasphemy.

Blasphemy is an impious utterance or action concerning God, gods, goddesses, or sacred things. (The very definition of "sacred" implies that jokes against it are entirely off-limits, hence the massive taboo and the special term known as "blasphemy.") One remorseful Pakistani boy made amends for unintentional blasphemy by cutting his own hand off.[2][3][4] Frequently, the definition is extended to include anything which would be regarded as "bad language." The fact that those people who believe in punishing blasphemers also seem to believe that that which is insulted is so weak as to require being defended by mortals is lost on the majority of them.

Blasphemy is considered by some, namely its practitioners, to be nothing more than a thought-crime committed against a non-existent entity. In places with strong religion-based law however, blasphemy laws can be, and are, used against those who don't even subscribe to the beliefs being blasphemed against.

The UN officially recognized the human right to blaspheme in General Comment No. 34 in late 2011.[5]

In the times of the Old Testament, blasphemy was punishable by death, and it used to be a criminal offense in many Western states. Although many of these laws may still exist on the statute books as technicalities, they are not now enforced, or at least not with any real punishment, in most western countries.[6] In the UK, the obsolete blasphemy law was repealed in 2008.[7] Some[8] feel that the Racial and Religious Hatred Act 2006 was put in place to replace it but, importantly, the new act focusses on offences against people, not offences against God. This may be attributed to the actions of Stephen Green, who attempted to use the blasphemy laws against Jerry Springer: The Opera and brought attention to the fact that the UK had such an arcane law still on its books.

However, blasphemy prosecutions do still occur throughout the world:

The majority of countries in Latin America and Central America never had any form of blasphemy law. The same is true for a few Western European countries such as Portugal, Belgium and Luxembourg, as well as the United States and the majority of Eastern and Central Europe. The Netherlands, Great Britain and Iceland had blasphemy laws in the books, but the laws were successfully repealed. Blasphemers may still get into trouble due to other laws over desecrating venerated objects (USA) or inciting religious hatred (UK).[27]

"Defamation of religion" is often a euphemism for blasphemy bandied about in an attempt to make said blasphemy seem culturally insensitive or otherwise politically incorrect.

The term is also used (properly, and not euphemistically) for speech which defames (in the ordinary sense of the word) an entire religion or its followers.

The best known example of which might be the infamous blood libels of medieval Europe. Indeed, "defamation" in regards to religion was originally used to counter antisemitism (see Anti-Defamation League). The talking point of the American right that "all Islam is radical Islam" could also fairly reasonably be lumped in this category, as could the claim that "all Muslims are terrorists."[28]

The Organization of the Islamic Conference, acting through its specific members, regularly brings resolutions before the UN Human Rights Council condemning "defamation of religion". The term itself sounds fairly innocuous, and in fact at first blush, even appropriate; if we let those anti-religion types run around and bash religion, the reasoning goes, it will lead to all kinds of things like icky Nazis killing off Jews. So the UN tends (or tended) to support the resolutions. Recently, however, this support has been waning, perhaps because the Human Rights Council has finally taken the bother to notice that a person can still be executed for "defamation of religion" in the member nations of the OIC, including Pakistan. In short: in modern theocracies, "defamation of religion" is essentially the same as blasphemy.

Even in the USA blasphemy can get a person into trouble. In Tennessee a man is in jail after posting unspecified notes to church doors.[29]

Some blasphemy in the Bible[edit]