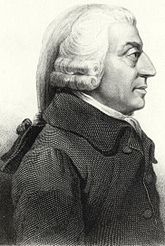 "I am a beau in nothing but my books." - Adam Smith

Adam Smith was an 18th-century Scottish economist often considered to be one of the fathers of modern economics, discussing the role of the free market. His 1776 work An Inquiry into the Nature and Causes of the Wealth of Nations contains several important ideas that continue to be relevant in contemporary politics and social science, such as the "invisible hand." He is also one of the most prominent figures in classical liberalism.

Smith used what appears to have been a common 18th-century metaphor of an "invisible hand" just three times in his writings, referring to three different things. Today, Chicago school and Austrian school economists claim that what Smith had meant in the third instance in which he is known to have used it is that when an economy is dominated by private power, an invisible hand "guides" the allocation of resources in the most efficient and optimal manner for everyone in it.[2] However, Smith himself only used the term once in The Wealth of Nations in reference to the effect of international trade on domestic trade, specifically between Britain and North American colonies. He argued against the idea that liberalized international trade would destroy the English economy, writing that a "home bias" among English investors who didn't speak foreign languages or have reliable contacts overseas would probably prevent this.

Smith is often invoked by conservatives and supply-side economics advocates (Alan Greenspan, adoring Smith's "clarity to the seeming chaos of market transactions," is the most infamous) despite the fact that Smith's actual beliefs are considerably more moderate than they are often portrayed.[3] One of Smith's more famous quotes is:

Or: businesses love to form cartels to increase profits.

One of the key elements of The Wealth of Nations was his theory of rent. He rejected the idea that landlords deserved rent as payment for looking after and improving properties, noting that even unimproved land receives rent, and saw that an essentially antagonistic and monopolistic relationship exists between landlord and tenant. He deduced that the landlord will always set rent at the highest possible level at which the tenant can exist and be productive, so the tenant is left with "the smallest share [of his income or production] with which the tenant can content himself". Specifically in agriculture, the landlord seeks to leave the tenant farmer with only the basic share necessary for life and work: "Whatever part of the produce, or, what is the same thing, whatever part of its price, is over and above this share, he [the landlord] naturally endeavours to reserve to himself as the rent of his land, which is evidently the highest the tenant can afford to pay in the actual circumstances of the land."[5] Marx praised this aspect of Smith's thought, while taking issue with Smith's views expressed elsewhere (e.g. on the value of labour).[6]

Amartya Sen, in an article for the Financial Times, notes "It is often overlooked that Smith did not take the pure market mechanism to be a free-standing performer of excellence, nor did he take the profit motive to be all that is needed." In addition, Smith supported the government intervening for the purposes of universal education or poverty relief, something agreed upon more by the center-left than conservatives.[7]

Wealth of Nations should also be understood in the context of Smith's Theory of Moral Sentiments, which provided an overarching description of his moral system. Moral Sentiments argues that two of the most important guiding factors in human life are sympathy and conscience (which he referred to as "the impartial spectator") and generally explores many philosophical themes outside of economics proper.

It has also been pointed out that Smith basically supported some form of progressive taxation, writing in The Wealth of Nations:

Smith worked for 12 years as Commissioner of Customs from 1778 to 1790[9], in charge of collection of customs and excise duties, during which time he recommended new taxes on inhabited property and malted barley to fund the war against the USA. This doesn't fit well with the American vision of Smith as a defender of freedom and enemy of taxation and tariffs.[10]