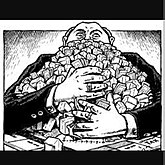 A Monopoly is a boring board game a state of market competition when there is only one supplier of a particular good or service. 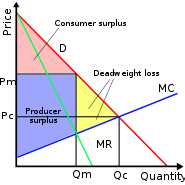 A monopoly exists when there is only one company or entity supplying some product on the market.[1][note 1] Economists view monopolies as inefficient because they face no competition, and can thus charge higher prices (PM) than the market rate otherwise might be (PC). They also tend to reduce output as well.[2][3] This creates a large amount of deadweight loss and enhances producer surplus at the expense of consumer surplus. Monopolies may not always be a bad thing. They can take advantage of economies of scale and keep prices low, at least for a while. The economist Joseph Schumpeter suggested monopolies could have advantages, such as the ability to conduct more research than other smaller firms do relative to their size. Still, the amount of market power an unaccountable private firm may have coupled with the political influence it can gain is often deemed as something dangerous to free enterprise and democracy.

Globally, the De Beers Mining company is thought of as the closest thing to a genuine international monopoly that has ever existed.[4] From the 1940s to 1970s world oil was dominated by the "Seven Sisters" a small cartel of private oil producers.[5] Since the mid-1970s OPEC has come to dominate world oil production and state-run energy enterprises have taken on a much greater burden of oil production. Despite coming close, and sometimes being referred to as monopolies, neither the Seven Sisters nor OPEC are true monopolies, rather they are closer to oligopolies.

The traditional response to monopoly in free nations has been to use antitrust laws against them. Antitrust laws encompass a broad range of rules and regulations that nations utilize to ensure a level playing field and fair competition.[6] In the late 19th century the United States witnessed the rise of a few large trusts that came to dominate individual markets. The Sherman Antitrust Act of 1890 and the Clayton Antitrust Act of 1914 are often invoked as the key legislative breakthroughs in American antitrust law. The Standard Oil Company possessed about 90% of the US refining business in the 1880s and was eventually broken up into 34 different firms in 1911.[7] Most historians and economist regard this as having been a success.[8]

Economists with libertarian political views like Milton Friedman and Alan Greenspan have been more skeptical about government antitrust action.[9] Friedman suggested that in the real world it wasn't really possible for a monopoly to form without government assistance. Even so, he did admit that the DaBeers mining company was a possible exception.[10] His solution to concentrated economic power was to remove laws favoring large firms and subject them to international competition via free trade. While most economists agree that free trade helps keep markets competitive, few are willing to abandon antitrust laws or textbook monopoly theory altogether.

Waste disposal tends to be a natural monopoly.

A natural monopoly is one that is considered unavoidable, or almost so. Often it can take advantage of economies of scale, supplying a large number of customers something as average costs decrease with each additional unit of output.[note 2] Utilities (gas, water, electric, sewage) are generally thought of as natural monopolies. Multiple competing sewage networks in the same dense urban environment is simply impractical. At the same time, because of the costs of building a sewage network and extending it to remote rural areas with small populations who wouldn't be able to reimburse the firm, utilities often end up being government-owned or heavily regulated in most communities. In some instances it may be more costly to have competition and so having one firm provide everything is seen as more natural.

Occasionally governments and societies want monopolies and will grant them to firms. One of the most common types of government granted monopolies are patents - intellectual property that gives one firm the exclusive right to sell a certain type of product.[11] Pharmaceutical patents are a common example. Because the costs of producing a new drug are often very high, governments are typically willing to allow the company a period of exclusivity. While this does mean the drug will be more expensive, the patent serves as an incentive to encourage innovation. Controversially, pharmaceuticals companies often argue the need for strong patent laws, while consumers and some economists have suggested alternatives.[note 3][12] In communist countries like the Soviet Union, virtually every enterprise was a state-owned monopoly.

As previously mentioned, utilities are often government monopolies.[13] Governments may use contracts with private firms to get them to achieve some socially-beneficial goal, like ensuring that even people in the remote outskirts of a city or town can still have water or electricity. By granting a power-company a monopoly on providing electricity or telephone service in a city, the government does give them a large amount of power. Via regulation or contract, however, the government will often manage prices to ensure the firm does not abuse its privileged position.

In the Age of Discovery, the kingdoms of Iberia (Spain and Portugal) set up trading monopolies for themselves, declaring that they had exclusive rights to exploit resources (precious metals and human resources) and to plunder in Asia, Africa and the Americas.[14] This had the effect of encouraging French, Dutch and English pirates/privateers, smugglers and colonists to disrupt the market[15] in the interests of international fairness.