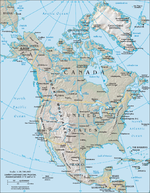 North America. Hawaii is not part of it.

North America is part of the vast American Supercontinent that is all that remains of Pangaea after Europe, Africa, China and India.[citation needed]

North America contains Canada, the United States of America (excluding Hawaii, which is in the Pacific Ocean) Mexico, Greenland, the Caribbean islands. It is followed by Central America down to the Panama Canal. Some, however, prefer to lump Greenland in with Europe and Central America in with South America). North America also technically includes the bit of Iceland west of the Mid-Atlantic Ridge, though Icelanders are culturally and economically European.

In addition to being NATO member states, the United States and Canada jointly host the North American Air Defense (NORAD) command, which remains active till this day.

See the main article on this topic: Canada

Canada is the northernmost part of North America. It's a member of the Commonwealth of Nations, composed of nations that the British colonised and kept links with even in independence. It's composed of ten provinces and three territories, which are slightly different legally. Being a territory or a province depends on how barren the place is. Due to the Barren Grounds, Canada borders three oceans.[1] Nice country, eh?

See the main article on this topic: US

America The United States of America is the centermost country, sandwiched between Canada and Mexico. One subject of derision, especially between people from Central and South America, Is that people from the US call themselves Americans, despite the fact anyone in North, South, Central, and even the Caribbean, could call themselves Americans. The United States has a worrying amount of Jingoism. Stereotypically, Americans talk derogatorily about foreigners, especially Latin Americans. However, this is starting to became less than a stereotype, with too many people in positions of power screeching about the too-lazy-to-get-a-job/ripping-jobs-from-hardworking-Americans (Depends on the situation) Mexicans. So much for America the beautiful!

See the main article on this topic: Mexico

The southernmost country in this list, Mexico. While most people know about the US and its 50 states, Mexico also has states; 32 of them.[2] Parts of California, New Mexico, and Texas originally belonged to Mexico (if you don't count the dispossessed and colonized Native Americans), with one Mexican state having the name of Baja California, or Lower California, in English.

There is a plot afoot[note 1] to create a "North American Union", by merging Canada, Mexico, and the US together through a NAFTA Superhighway. The currency would be the Amero. Somehow, this is supposed to dilute the sovereignty of the United States, despite the fact that, as the most populous, richest, and most powerful part of this union, it would likely dominate it. Instead, it is somehow supposed to create a "socialist mega-state", presumably with evil socialist free healthcare, since two of the nations in North America have it.

These countries are way smaller than this map makes them look.

Central America is the part of North America south of Mexico. A good way to remember this is that it's the region between Mexico and Colombia, being separated from South America by the difficult-to-traverse Darién Gap.

Its members are Belize,

Nicaragua, and Panama. The reason this term exists is because the former six countries were part of the Federal Republic of Central America,

everybody started getting pissed off at each other and seceding. Costa Rica is famous for being the largest country in the world that lacks a military, although their police force fulfills a similar function. Most of these countries were exploited by large corporations that bought and couped their way into government. After those corporations stopped, gangs took over. The average person makes $8,698 in purchasing power parity a year. Essentially, this region is to Mexico as Mexico is to the U.S., as in a source of poor migrant workers that a large chunk of the populace irrationally dislike.