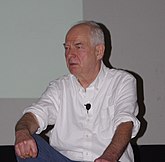 Adbusters is an anti-capitalist, environmentalist group that was founded in 1989 in Vancouver, British Columbia, Canada by by Kalle Lasn

(1942–) (a former marketing CEO) and Bill Schmalz. They publish a magazine that subsists entirely on subscriptions and newsstand sales, no advertising. They are the creators of Buy Nothing Day and were one of the early instigators of Occupy Wall Street.[1]

While a darling of sorts among its target audience, Adbusters isn't without serious criticism. The magazine's self-professed radicalism tends to translate into confrontational (if not incendiary) statements, though not always for the right reasons; it got the ire of the Anti-Defamation League for instance over articles critical on Israel that also border on Anti-Semitism.[2] That same mentality has also led to the group getting away with endorsing both dubious populist groups (like Beppe Grillo's 5-Star Movement) and crank ideas such as mental pollution while flaunting anarchist, socialist and situationist pretensions.[3]

In addition, there's the group's confusing double standard of decrying capitalistic brands while encouraging people to buy their own. As Joseph Heath and Andrew Potter put it, Adbusters' method of rebellion "is not a threat to the system — it is the system."[2]

Buy Nothing Day protest in San Francisco in 2000

Buy Nothing Day is a day of protest founded by the Adbusters movement. As the name implies, it is a day during which participants refrain from making purchases in order to protest consumption and commercialization. In the UK participants in Buy Nothing Day are advised to be nice to shoppers and reminded that "Ultimately, shoppers won't listen if you treat them like the enemy."[4]

In the U.S., Buy Nothing Day occurs on "Black Friday", the day after Thanksgiving, traditionally the start of the Christmas shopping season and the biggest shopping day of the year. It is held on the following Saturday in the rest of the world.

Buy Nothing Day is a part of the international communist atheist pagan furry homosexual War on Christmas.

This organizations-related article is a stub.
You can help RationalWiki by expanding it.
Retrieved from "https://rationalwiki.org/w/index.php?title=Adbusters&oldid=2477261"
Categories:
Hidden categories: