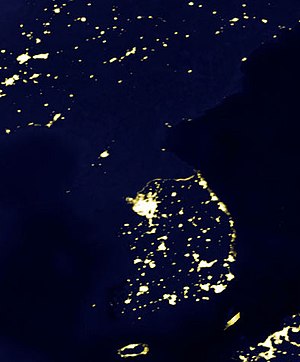 Earth Hour is a global movement which takes place on the last Saturday of every March. On that night, between 8:30 to 9:30 PM local time, people around the world are urged to turn off their lights.

It is an excellent way to feel good about doing something for the environment when you're actually not. The energy demand of the world is so high that switching even all the light bulbs off for an hour a day is unlikely to dent total energy consumption, which is primarily blown on heating, cooking and transportation. Even so, replacing light bulbs with more energy-efficient ones is a far more useful activity, saving more energy than switching them off for an hour without the inconvenience of having them switched off for an hour.[1][2]

In addition, the dramatic and oft-pictured goal of making the globe appear darker from space due to switching off the lights is somewhat of a lost cause. In developed areas, street lamps shine the entire night long, and in some places are even brighter than residential lights. Furthermore, the lights in 24-hour businesses also run all day and night, and in the cases of apartment buildings and hotels, it is often mandatory by fire codes or other laws. Switching these lights off is considered a safety hazard.

In unrelated events, small settlements have managed to turn all their lights off for a set period of time to allow viewing the stars in a way that isn't normaly possible in built-up areas. If "astronomy date ideas" suddenly pop up in Google Trends on the day of Earth Hour, that's probably why.

If the hippies do it, we must do the opposite![edit]

Earth Hour causes amusing cases of derangement in right-wingers and anti-environmentalists. Normal people who don't care about Earth Hour simply don't turn their lights off and write criticism like the section above, or go along with it anyway just to go to sleep. Wingnuts feel compelled to do something, though.

A common one is turning on all their lights and/or electrical appliances. Since 2009, the Competitive Enterprise Institute is pushing its "Human Achievement Hour" as an alternative, coinciding with Earth Hour. (Their original press release is amusing in its display of pundit logic - it tries to claim everyone not participating in Earth Hour as participating in the Human Achievement Hour.[3])