Each year America's ruler pardons a bird to signify the power of life and death he holds over every American.

Thanksgiving is a national holiday celebrated in the United States on the fourth Thursday of November and in Canada on the second Monday of October.[1] It has connections with the harvest festivals celebrated around the world at the time of year when crops have been gathered in. But in the US it particularly refers to the arrival of the Pilgrim Fathers on American soil and an alleged incident or incidents when WASP colonists shared food with Native Americans, cementing the US's long history of racial harmony. To celebrate this tradition, nearly every American family today invites their racist uncle who forwards weird chain emails to awkwardly avoid conversation with on Thanksgiving.

In the US, the festival has become controversial because of its relationship to racial politics and the genocide of the country's original inhabitants.[2] It's clear that the original celebration bore little resemblance to current Thanksgivings, although it's uncertain if it bore any more resemblance to the scene in the film Addams Family Values[3]. And the event attracts many other myths including whether turkey makes you sleepy, and the origin of Black Friday the following day. Because of US-centrism, most of this article is about the US's celebration, but the plucky Canuck should not be forgotten, even if they stole most of their celebration from down south.

History of celebration in US[edit]

If your Thanksgiving is any less pleasant than this, you're a communist.

Although it is claimed to date back to the 1620s (see below), early observance is uncertain, with many people aggressively claiming to have been first. It appears to have been celebrated in the 1620s or 1630s in New England.[1] Although at the time it probably wasn't called Thanksgiving, which referred to a separate religious celebration.[4] And celebrations were not held regularly.[4] There are suggestions it reflects Dutch celebrations in Leiden in the late 16th and early 17th century, and claims that there were similar celebrations by Spanish explorers and colonists in Virginia prior to the New England observance.[1] This may reflect arguments about historical priority among colonists. Historians know that people have eaten big dinners in autumn for thousands of years.

In the 17th century, it was generally an informal observance with local church leaders declaring when it would be celebrated. An official holiday was suggested during the American Revolution, and it was formalised shortly after American Independence, with George Washington declaring a nationwide Thanksgiving on November 26, 1789. In the early republic there was a lot of regional variance in exactly when it was celebrated, but the authoritarian tyrant Abraham Lincoln fixed it as the last Thursday in November in 1863, part of his American Civil War propaganda. It may have been related to the arrival of the Pilgrims on November 21, 1621 (although that date depends on whether you're reckoning dates Old Style or New Style). Again in wartime, Franklin Roosevelt on December 26, 1941 moved it to the fourth Thursday, a change which actually had no effect most years.[1][4] 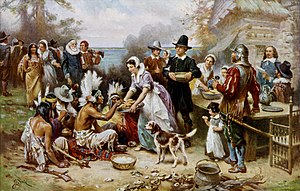 Many events in North America have been suggested as the origin, inspiration, or exemplar for the feast. Many historians (e.g. James W. Baker in Thanksgiving: the biography of an American holiday) claim that these were actually irrelevant and had no influence on the modern holiday.[1] Additionally, many of the early feasts would not have been known as Thanksgiving, because that was the name for a religious observance, not a big meal.[4]

Being nice to the natives[edit]

The French feast in 1606 was perhaps the first case where colonists sharing their food with the natives was an important part of the story. It is also an element of the 1621 Pilgrim story, where historical accounts suggest both Europeans and native Americans provided food.

Ramona Peters, the Mashpee Wampanoag Tribe's Tribal Historic Preservation Officer, claims Lincoln popularised the idea of Europeans and Native Americans eating together to promote national unity at a time when the South was busy seceding. The Pilgrims were starving and desperate, their numbers reduced from 90 to 23, so they were reliant on natives for aid and protection, but at the same time were suspicious and regarded the natives as savages. She says that what actually happened was the settlers held a big celebration with lots of noise, firing guns in the air, and 90 native troops under Massasoit turned up to find out what was going on and stayed around to keep an eye on them.[10] It's unclear what evidence her account is based on, and it may not be any more accurate than the stories told by the Pilgrims' descendants.

There is a lot of conjecture about what was eaten by the Pilgrims in their first Thanksgiving. It's reported that William Bradford, governor of the Plymouth colony, sent men to hunt wild fowl for his 1621 celebration. There were wild turkeys in the area, but also waterfowl such as ducks, geese, and the delicious white swan. The natives reportedly brought deer. Shellfish was also a common food for the colonists because mussels could be collected on beaches without much effort. The History Channel suggests it would have been unlikely that they ate cranberries, since the sour crimson fruits require a lot of sweetening, and sugar was in short supply. Potatoes had not made the journey from South America via Europe to the north. They also lacked butter and flour to make pie crust, but may have eaten pumpkin some other way, possibly roasted whole.[9][11]

Native Americans in the area (and elsewhere) had a long tradition of giving thanks for various events in the course of a year, such as the harvest, the arrival of migratory fish, and the new year, including by making offerings of tobacco.[10]

Today Americans eat a shitload of food including roast turkey and pumpkin pie, watch Detroit and Dallas play the NFL Thanksgiving games,[12] and act out scenes from the Friends Thanksgiving episode where Ross and Monica lay in the mud holding a football for hours. Probably.

The Canadians also celebrated it in a varied local fashion for many years, with it becoming increasingly popular in the 18th century as British loyalists moved north following US independence.[6] Surprisingly, the first official Canadian Thanksgiving holiday is claimed as April 15, 1872 when the Prince of Wales was convalescing.[1] It was held on (or around) November 6 for many years, but after World War I this collided with Armistice Day, celebrated on November 11 to mark the end of the war. In 1957 the date was fixed by parliament as the second Monday in October. This is coincidentally also now Columbus Day in the US, and is increasingly celebrated as Indigenous Peoples' Day, because fuck you Columbus.

The earlier onset of Canadian winter is often advanced as reason for their earlier observance, but even in the USA it's well after harvest time, so this may be another myth.

It often has a religious component in Canada, with churches decorated in the manner of a European harvest festival with all the bounties of nature. Its celebration is however much influenced by the US model, with Canadian football on TV and roast turkey and all the trimmings.[6]

One piece of oft-repeated lore is that turkey makes you sleepy, supposedly due to the amino acid tryptophan which it contains.[9] However this has been debunked by other people who point out that many other foods contain tryptophan, and if you're sleepy it's probably because you've just spent hours eating (and possibly preparing) a ton of food and drinking similar quantities of alcohol.[13] Mythbusters tested this, and decided that it was the high calorie intake that made Tory and Grant sleepy, not the tryptophan.[14]

"Black Friday" is the day after Thanksgiving, when traditionally people spend lots of money, originally on Christmas presents but increasingly on ludicrous discounts offered by desperate stores. There are legends about the origin of this name.[15]