If the Turkish flag got drunk.

The Nation of Islam (NOI) is a cult chimera and an extremist hate group [1] consisting of Islam-flavored rhetoric, black supremacism, virulent antisemitism, and Scientology-levels of crank magnetism. Basically, the Nation of Islam is to Islam what the Ku Klux Klan was to the Christian Identity movement. It is safe to say the NOI owes more to American history than it does to the Middle East.

While professing to be Muslims, the NOI's theology bears no resemblance to the beliefs of Sunni or Shi'a Islam.[note 1] Unlike Islam, the Nation believes that all Allahs[note 2] have been human beings with corporeal forms. It teaches that Muhammad was the incumbent Allah's son, rather than a mere prophet. They also think that their founder, a man named Wallace D. Fard

Nation of Islam has traditionally been xenophobic and black supremacist, to the point of naming all people of European descent "White Devils" and only "potential humans".[3] They believe the Jew is responsible for much of the evil done in this world; there are even off-the-cuff statements by members regarding AIDS being intentionally designed or administered onto the Blackman by Jewish doctors, saying that: "We know that the Jews are the most organized, rich and powerful people, not only in America, but in the world. They're plotting against us as we speak."[4]

In the "Aliens, Bigfoot, and Creationism" category, Nation of Islam teaches that a mad scientist created other races from the "Blackman" through a eugenics program.[5][note 3] The scientist, Yakuba[note 4] decreed that his creations would rule for 6000 years over the Blackman.[5] 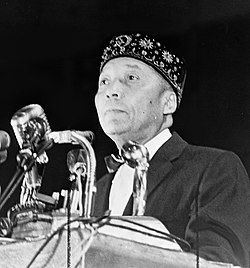 In the 1930s a then-unknown preacher founded the Nation of Islam. Wallace D. Fard, a.k.a. Wallace Fard Muhammad (also believed to be American-born Wallace Dodd) spent three years in Detroit where he opened the first NOI mosque. Three years after he began teaching, he disappeared, passing along the leadership of the NOI to Elijah Mohammad, who then proceeded to deify the Master Fard Muhammad, claiming he was God's physical return to the earth from Mecca.

It was under Elijah Mohammad that the Nation of Islam fully realized its distinctly non-Sunni beliefs. His education was limited to four years of elementary school and his religious affiliations as a boy were traditional southern black Christian. He did not speak Arabic, nor view Arabic to be an important part of his Islam. His familiarity with the Qu'ran has been debated, and certainly he was not part of an Imam community to discuss its use at any length. Certainly, one of the appeals of Islam in the early 1930s-1950s was its threatening exoticness to white Christian Americans more than the actual theology of Islam.

Under Elijah Mohammad, the Nation of Islam became primarily a socio-political black activist and separatist group, guided and informed by the new religion. Elijah Mohammad taught that blacks were the first people, and were the original Muslims. He taught that the Blackman was not only tricked out of his place of power, but that a mad scientist, Mr. Yakub, separated the "brown gene" from the "black gene" and "grafted" it into a white — after 600 years of this, the White man was made.[6] The White man would reign over the Blackman for 6000 years.[5] Official Nation of Islam doctrine is that the most effective way for the black man to regain power is to build their own nation on separate land in the United States.[7]

See the main article on this topic: Malcolm X

One of the most famous African American leaders began his religious teachings as a Nation of Islam convert. He was responsible both for popularizing the NOI and bringing it to the forefront of the American consciousness in the 1950s. Malcolm was a skilful public speaker, and soon won his own personal following, making Elijah Mohammed envious of him. In turn, Malcolm claims he began to nurse increasing doubts over the direction and message of the group.

After actually visiting Mecca itself, Malcolm soon realized that the NOI had nothing to do with Islam and began practicing Sunni Islam. He was eventually murdered for speaking out against Elijah Mohammed and attempting to form his own black Sunni Muslim group.

See the main article on this topic: Louis Farrakhan

After the death of Elijah Mohammad in 1975, his son, Warith Deen Mohammad, brought the organization to a more mainstream Islamic position, which came to be known as the American Society of Muslims. Louis Farrakhan led a group of supporters who chose to rebuild the Nation of Islam, returning it to the more extremist positions, including separatism, institutionalized racism, and anti-Semitism (they believe Jews to have been behind the slave trade, among other things).

What most people know as the NOI today is Farrakhan's personal fiefdom.

Undoubtedly the Nation's greatest theological difference from Islam is that it is not monotheistic. Its beliefs are closer to monolatrism: believing in the existence of multiple gods, but worshipping only one. In fact, since the Nation teaches that the potential "godhood" is present within each black person, it could even be called polytheistic.

The Nation's gods are not even deities as most people today understand that word: rather, each was an extraordinarily powerful, but mortal, human being. Per the Nation, the current Allah did not create the Universe, but is rather the latest in a succession of "Allahs" stretching back to the universe's creator. He currently resides on a spaceship called "the Mother Plane," from which He and His Imams monitor humanity.[8]

Interestingly, almost all of Elijah Mohammad's teachings about the Blackman and his role on Earth come from the Bible rather than from the Quran, including the idea that the Blackman is "the seed of Abraham"[9] that is mentioned in Genesis. This undoubtedly helped with proselytization: African-Americans, as an overwhelmingly Christian ethnic group, would have been more easily reached with Biblical messages, rather than with Quranic ones.

The Nation Of Islam's central scriptures are Elijah Mohammad's writings, compiled and published in 1965 as Message to the Blackman in America, which contains two telling platforms: What Muslims Want and What Muslims believe.[10] Under Elijah Mohammad, the converts followed the Five Pillars of Islam.[note 5] Modesty and abstaining from alcohol are also prohibitions gathered from traditional Islam. Prayers were, and still are, usually in English, of course.

On the Bible: Quoted from What Muslims Believe: WE BELIEVE in the truth of the Bible, but we believe that it has been tampered with and must be reinterpreted so that mankind will not be snared by the falsehoods that have been added to it (this follows mainstream Muslim views).[note 6]

The NOI believes that the Sun and the Moon were once one source of light, and that the Earth itself is over 70 trillion years old. They also believe in UFOs, and claim that Ezekiel, in Ezekiel 1:15-18, is describing the UFO on which all Allahs have resided. Japan is the original source of the Evil Scientists, and of other, malevolent UFOs.[note 7] No, seriously.

Oh, and they believe dinosaurs are a fabrication of the white man.[11]

Since 2010, Louis Farrakhan has been encouraging members of the Nation of Islam to waste their time and money by joining yet another cult study Dianetics.[12] He claimed it would be used as a tool for white people "to become 'civilized'".[13] To the surprise of nobody, Farrakhan later confirmed an official and ill-advised alliance with the Church of Scientology.[14]

About a decade ago they published a book The Secret Relationship Between Blacks and Jews, which blames international Jewry for the slave trade. The book is credited only to The Nation of Islam, with no author's name given. 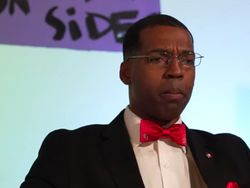 , alongside other noxious individuals such as Robert F. Kennedy Jr., Joseph Mercola, and Ty Bollinger. Some examples of the bullshit Rizza Islam tweeted that were referenced in the report included an incorrect conspiracy theory that the COVID-19 vaccine made women infertile and claims that the vaccine was produced for nefarious reasons by Bill Gates. [15] Rizza Islam has also claimed that the COVID-19 vaccine is part of a depopulation plot targeting Black people. These claims are echoed on other portions on the Nation of Islam website (reinforced by references to the Tuskegee syphilis experiment, an event that understandably may make members of the Black community distrustful of the American health care system). [16][17] In a January 2021 sermon, NOI minister Wesley Muhammad made anti-semitic claims that the "pestilence from heaven was called down by the sins of Israel". Muhammad also claimed, inconsistently, that the virus was a "pestilence from heaven that came through the laboratory of Satan", with the laboratory in question being the Israel Institute for Biological Research

The NOI is one of the wealthiest religious organizations in the African-American community. Their holdings include a 5000-acre farmland in Terrell County, Georgia and multiple grocery stores around the American South and Midwest. Louis Farrakhan’s net worth is estimated at around $3 million.[20] Due to this and its advocacy for self-determination, unity, and black economic empowerment, the Nation of Islam has gained a sense of legitimacy among African Americans, especially in impoverished black urban areas and among ex-felons in which they sometimes engage in charity work for. Like many cults, this can have the unfortunate effect of compelling some into believing in some of their rhetoric about whites, Jews, and other conspiracy theories and potentially being recruited into the Nation of Islam out of racial pride.