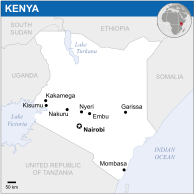 The Republic of Kenya is a state in eastern Africa. It has a presidential executive and a bicameral legislature, and its capital and largest city is Nairobi. The country's population is predominantly Protestant Christian, although Catholicism and Islam are practiced by a significant minority.[2]

Its location makes it one of the most productive agricultural regions in Africa.[3] This historically put a giant target over the entire region for European colonialism. Trading posts established by Portugal and Oman traded in slaves, and the Kenyan region became a major hub in the Indian Ocean slave trade. Kenya later became an area of interest for the British Empire, which established a protectorate over it during the Scramble for Africa. British colonization disrupted Kenya's tribal agriculture system, causing the displacement of entire populations. Dissatisfaction among the native Kenyans finally resulted in the Mau Mau Uprising in 1950, which lasted until the British finally agreed to grant Kenya independence in 1963.

Kenya is a relatively stable country in Africa today, and it's almost an okay democracy. Almost. The country's primary challenges mainly stem from the fact that it neighbors Somalia, meaning that Islamist terrorism tends to spill over the border. In terms of politics, Kenya has its notorious ban on homosexuality, which is still a major human rights issue. Kenya's civilian authorities also seem perpetually unable to curb excessive violence and criminal activity from the country's security forces, meaning that Kenya routinely sees extrajudicial executions, arbitrary detentions, and torture.[4]

The US State Department maintains a Level 2 Travel Advisory against Kenya, warning potential travelers that many parts of the country pose a high risk of crimes such as kidnapping and mugging, and terrorism.[5]

Kenya is most famous for being the birthplace of former US president Barack Obama.

The jahazi, or dhow, was the type of sailing ship used by traders along the Swahili coast.

The northern coast of eastern Africa is known as the Swahili coast, and for much of the Middle Ages and the Early Modern Age, this area was home to a series of highly lucrative trade routes and hubs. During this time, Muslim traders from North Africa and Arabia intermingled with the Bantu peoples of eastern Africa. Their attempts at mutual understanding created the syncretic Swahili culture and language.[6][7]

Funded by lucrative trading opportunities, the Swahili people grew their agricultural settlements into booming trade hubs, forming multiple powerful city-states along the Swahili coast. Three notable city-states in Kenya were Lamu, Malindi, and Mombasa.[8] Merchants traded in ivory and gold from the African interior, frankincense and myrrh from Arabia, and goods from as far as India and Imperial China. These trade networks brought large numbers of Muslim merchants to the Swahili coast, and by 1350, most of the region had converted to Islam.[8] In 1417, 1421, and 1431 CE, Ming dynasty Admiral Zheng He visited the Swahili coast during his great treasure voyages, and he brought curios like lions, leopards, camels, ostriches, rhinos, zebras, and giraffes to China as well as trade goods like gems, spices, medicines, and fine cotton cloth.[9]

East Africa was also the source of the Indian Ocean slave trade, as the Swahili city-states fed the Middle East's great demand for slave labor.[10] Slaves would be captured by other Africans and forced to march long distances to the trade hubs, where they would then be bundled onto cramped ships and sailed to their final destinations. It's impossible to know how many slaves were involved, but it's estimated that about 75% of all the black slaves died before reaching the markets, usually of hunger, illness, or exhaustion.[11] Senegalese historian Tidiane N'Diaye estimates that about 17 million Africans were enslaved. 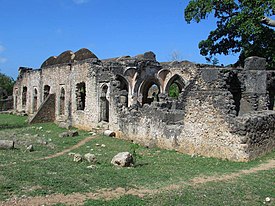 Ruins of a wealthy merchant's residence in Kilwa.

East Africa's era of prosperity ended when Portugal came 'round the tip of Africa and arrived to steal all of their shit. Unlike the Muslims from up north, the Portuguese weren't interested in trading. After all, if you can buy something from someone, you can just shoot that person and take it for free. The Swahili city-states were unable to resist due to their lack of coordination and the fact that they had never been forced to fend off such an invasion before.[12]

The Portuguese hit Zanzibar first in 1503, then moved northward to Kilwa and Mombasa in 1505.[13] The Portuguese would arrive off the city's coast with their ships and then bombard the city until its leader surrendered. The city-states were then forced to pay tribute to Portugal. Mombasa in Kenya was the worst hit because its sultan refused to submit. The Portuguese then landed troops in the city to strip it of anything of value and then destroy it. According to contemporary English doctor James Prior,[13]

This Portuguese policy was short-sighted, as regional trade simply shifted to avoid them. Realizing that their new land was thus useless, Portugal abandoned the Swahili coast and moved southwards into Mozambique to look for gold.[12] 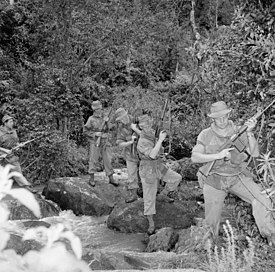 British soldiers on patrol during the Mau-Mau Uprising.
See the main article on this topic: British Empire

During the Scramble for Africa, the British decided to hippity-hop in Kenya to turn it into a colonial territory. They used the Indian Ocean slave trade as an excuse, claiming that they were invading Kenya to put it to an end.[14] And they did, banning slavery in 1874. Facing colonial competition from the German Empire, the British then moved to annex the entire Kenyan region.[15]

British administration in Kenya was complicated by local resistance and the fact that the region had been devastated by slave raids and kidnappings.[15] The British quickly realized that Kenya wouldn't be a profitable colony, so they looked further inland to establish plantations in Uganda. During World War I, Kenya became the seat of the British effort to invade and occupy German East Africa.[16] German East Africa proved to be a tough nut to crack due to the efforts of Lt. Col. Paul von Lettow-Vorbeck, and the colony didn't fall until the very end of the war. During the process, the British mobilized about 400,000 people from Kenya.[16] Kenya again had to mobilize troops in the next world war.

The colony's most infamous chapter came during the Mau-Mau Uprising. This was a pro-independence guerilla war fought against the British, mainly by members of the Kikuyu ethnic group, Kenya's largest.[17] Due to ruthless anti-insurgency tactics by the British, it has become a flashpoint for debates about whether the British empire was conducted in the best interests of the governed.[18] Even after dealing with Nazi Germany, the British went so far as to use concentration camps. As the Guardian put it in 2011,[19]

Although the British put down the rebellion, they realized that something needed to change in Kenya. They granted Kenyans more authority and began transitioning the country towards independence. Kenya became independent in 1963.[20]

Kenya has long been one of the better-run countries in Africa, but that stability is threatened both by communal violence and spillover from Somalia. Many of the Islamist groups in Somalia receive most of their funding from "Little Mogadishu" in Kenya's capital, Nairobi. The Northern areas of Kenya, which border Somalia, have also long had a significant ethnic Somali population.[notes 1] There used to be an understandable sentiment of wishing to be "reunited" with Somalia. Now, not so much.[notes 2]

Kenya's government is always willing to learn from other countries, which is why their birth certificates look remarkably like those of South Australia.[23] Kenya's farmers are also globally pioneering the "biodigester" method of turning livestock shit into a shockingly effective organic fertilizer for crops.[24] The UN's climate change experts are watching and encouraging the program, hoping it holds one of the keys to global food sustainability.

Kenya's also known for their unmatched (okay, maybe by Ethiopia) talent in marathons and middle- and long-distance in track. 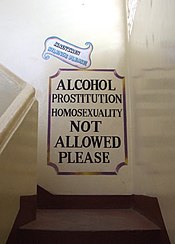 At least it says please.

LGBT individuals face extreme harassment from state officials and security forces, are denied medical services, and are sometimes even subjected to "corrective rape".[27] Refugees from other parts of Africa who are discovered to be LGBT are subjected to extreme violence, often by mobs. In one instance, a gay Somali teenager was doused in petrol and would have been set on fire if not for the intervention of an older woman.[28]

"Corrective rape" is also a serious issue among the Kenyan public and police. In an almost ritual manner, the community will send men into a lesbian's home to rape her, hoping that it will somehow convert her back to heterosexuality.[29] It doesn't work.[citation NOT needed] Many victims end up committing suicide.

High poverty levels have sadly led to a high rate of child labor and even child prostitution. In 2018, the government greatly increased the number of labor inspectors, inspections conducted, and child labor violations identified, but this still does not seem to be sufficient to stop child labor.[30] About one-third of Kenyan children aged 8 to 14 are involved in child labor activities.[30] Kenyan children are victims of human trafficking within and outside the country, and they are exploited to engage in domestic work, agricultural work, fishing, begging, and street vending. Many children are also used as sex slaves in tourism-heavy areas.

Kenyan law mandates free education and prohibits schools from charging tuition fees. However, the high cost of unofficial school fees, books, and uniforms prevents many children from attending school.[30] 40% of children who complete primary school do not transition to secondary school, leaving many children at risk of exploitation.[31] Luckily, Kenya has recently started rolling out free secondary education for all of its children.