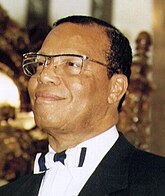 The smugness that only a racist can achieve.

Louis Farrakhan (born Louis Eugene Wolcott in 1933 and formerly known as Louis X) is an American black supremacist, antisemitic and anti-white conspiracy theorist. He is the leader of the Nation of Islam, a radical African-American religious, political and social movement. Farrakhan also happens to be a massive racist and bigot, having made innumerable hateful statements against whites, Jews, Asians, women, and gays over the years.[2] Much like Hugo Chavez with Latin America, a depressingly large number of people genuinely believe he is in this for something besides self-aggrandizement and that he truly looks out for the best interests of all black people. For someone who explicitly advocates the use of violence towards so many people, he has an extremely unintimidating and alarmingly high pitched voice.

The family of Malcolm X, a black power activist and former Nation of Islam member, believe Farrakhan was behind his assassination. Members of the Nation of Islam assassinated Malcolm after he left the nation due to the hypocrisy of various leading figures preaching against and simultaneously indulging in various vices. Farrakhan has publicly condoned the assassination, saying it was justified because Malcolm was a traitor to the Nation of Islam, although he later backtracked these comments.

See the main article on this topic: Misogyny

He has banned women from attending his rants, and has also given women-only speeches. He clearly did not appreciate the irony when addressing a women-only audience close to where he was raised by his single mother: "Your professional lives can't satisfy your soul like a good, loving man."[3] In a bizarre display of cognitive dissonance, three of the leaders of the Women's March

have effusively professed their admiration for him and his ravings; even these comments would not persuade them to back away from him.[4][5]

See the main article on this topic: Dictator

Farrakhan expressed admiration of Muammar al-Gaddafi on many occasions and received the Al-Gaddafi International Prize for Human Rights in 1996.[7] He called Barack Obama "America's first Jewish president" because of the 2011 intervention in Libya.[8]

Farrakhan is a supporter of Fidel Castro and the Cuban Revolution, and has had medical operations performed in Cuba.[9] He also denies Cuba's human rights violations.[10]

In accordance with the Nation of Islam's teaching on race, Farrakhan believes that all white people were made "a race of Devils" by an evil scientist called Yakub

(supposedly based off Jacob of the Old Testament). Given these somewhat insane views, it should come as no surprise that Farrakhan found a friend in Scientology and urges all his followers to take the white devil's Dianetics.[12] He also did an interview with Alex Jones lasting for over two hours, in case you're interested.[13]

He also believes that the U.S. government deliberately demolished a levee following Hurricane Katrina in an effort to force black people out of New Orleans, despite multiple engineers pointing out that this bizarre idea is not even wrong.[14] As a raving anti-Semite, Farrakhan has promoted various forms of an international Jewish conspiracy, including Jewish ownership of the media and Jews being responsible for the slave trade.[15] Speaking of Bernie Sanders, Farrakhan has said "He's a Jew … [but] he's trying to be decent".[16] Farrakhan is within the statistically 0% of Black Muslims who support Donald Trump for president. He also dislikes Freemasons.[17]

Farrakhan and the Nation of Islam have been heavily influenced by medical "expert" Leonard Horowitz,[18][19] and as a result, they have embraced and promoted a large amount of dangerous pseudoscience to the black community. In 2009, Farrakhan got on the vaccine hysteria bandwagon, claiming that the H1N1 vaccine was in actuality a part of a plan to kill off people in order to ease overpopulation[20] and calling for black people to boycott vaccines. He also believes that Ebola was made by whites as a way of killing blacks off.[21] Farrakhan has made similar claims in the wake of the COVID-19 pandemic claiming that vaccines are a plot to kill off non-white populations and encourages the black community not to get vaccinated.[22]

Farrakhan happens to be a good violinist, and as an olive branch contrasting with his anti-Semitism, he performed the violin concerto by Jewish composer Felix Mendelssohn.[23]

A 1990 video of Farrakhan on The Phil Donahue Show

addressing institutional racism, race relations, and plight of black people in the United States surfaced on social media. The video plays just a little fast and loose with the facts, but nonetheless highlights why many people, especially in the black community, support him and tend to overlook his history of racial bigotry, anti-semitism, sexism, and homophobia.[26][27][28]

Support amongst the black Community[edit]

Due to his charisma and social work as the leader of the Nation of Islam, Farrakhan has gained a sense of legitimacy amongst African American leaders and celebrities. This has unfortunately lead to some major gaffes by celebrities who repeat (and in some cases double down on) some of his anti-Semitic rhetoric as they often believe his conspiracy theories about Jews controlling the world and/or Jews of European descent not being true Jews.[29]