CERN, or the European Organization for Nuclear Research, is located near the city of Geneva, Switzerland.

It is also where Tim Berners-Lee invented the World Wide Web (which should not be confused with the Internet). Thanks, Tim!

As of 2010, scientists at CERN are currently using the Large Hadron Collider to accelerate and collide particles, slowly pumping the power level up until it reached a massive 13TeV which happened in 2015.[2] 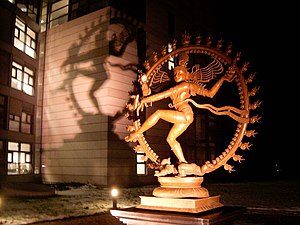 Not the wrathful tyrant of the desert — therefore, a sign of evil!

As a European scientific organization operating a lot of weird machinery, CERN is sometimes accused of nefarious activities by conspiracy theorists.

For example, a statue of the Hindu god Shiva as Nataraja was presented as a gift from India in 2004,[3] and consequently was used as evidence for various batty claims — such as CERN trying to resurrect ancient gods, and no, that's not a metaphor.[4]

It is, however, both a decent idea for a movie and what appears to be an accidental nod to Nietzsche's notorious statement that God (or the gods) are dead in the first place. Why human involvement via CERN would be required to resurrect a deity, when the same omnipotent divine has allegedly already pulled that exact stunt on its own remains to be explained by the kooks in question.

A cataclysmic shift of Earth's magnetic poles resulting from the activation of the hadron collider was the premise behind the Spanish TV show "El Barco" ("The Ship").[5]