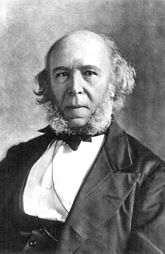 Herbert Spencer (1820–1903) was a British philosopher, classical liberal political theorist, and polymath. Often described as an agnostic or a Deist, he took a stance of "agnostic realism" in which he believed a god exists but he is impossible to know.[1]

The phrase "survival of the fittest", generally mis-attributed to Charles Darwin, actually originated as a coining by Spencer in his 1864 book The Principles of Biology. Darwin's preferred phrase for evolution by natural selection was "descent with modification". Darwin didn't include the words "survival of the fittest" in On the Origin of Species until the fifth edition (1869) and attributed them to Spencer himself.[2]

Spencer is considered one of the archetypical proponents of "social Darwinism," which demonstrates the problems with this appellation. Spencer indeed supported a laissez-faire ideology and sought to apply Darwin's ideas to the social realm, but radically altered them in the process. For one, Darwin was opposed to a teleological view of evolution while Spencer believed that humanity could be made to evolve toward a "perfect" state. The idea of a "perfect man in a perfect society" featured prominently in his writing.[3][4][5] Spencer's conception of evolution was as much Lamarckian as it was Darwinian, if not more so. His notion of evolutionary progress was dependent on the accumulation of Lamarckian inheritance of acquired traits. Social Statics, his first major work of social and political theory, was actually published in 1851, i.e., before Darwin's Origin. He combined some of his earlier views of psychology drawn from phrenology (some of which he later dropped) and associationist psychology (a forerunner of Pavlovian conditioning and behaviorism) with evolutionary theory, especially Lamarckism.[6] He also borrowed from Auguste Comte's brand of positivism. The association of Herbert Spencer with social Darwinism is disputed and attributed to Richard Hofstadter and his 1944 book Social Darwinism in American Thought.[7]

Spencer's early opposition to private property in land, expressed in the chapter "The Right to the Use of the Earth"[8] which was deleted from later editions of Social Statics, made his early work popular among Georgists, and Spencer himself expressed sympathy for Henry George's ideas. His essay "The Right to Ignore the State"[9] likewise remains popular among anarchists and libertarians. Social Statics also held that human society would eventually learn to function and coexist on its own with a consequent "withering away" of the State. Peter Kropotkin listed Spencer as one of many influences on anarchism in his entry on anarchism for the 1905 Encyclopedia Britannica while warning that Spencer's views on criminal justice and contract enforcement "[open] (in the present writer's opinion) the way for reconstituting under the heading of 'defence' all the functions of the state"[10]. Marxist writer Paul Lafargue was less charitable, writing a juicy polemic denouncing Spencer's views as a bourgeois defense of capitalism.[11]

His politics became more conservative as he aged. Initially a proponent of the women's liberation movement, he turned against it later in his life as can be seen in his ongoing relationship with Marian Evans (George Eliot).[12]

Spencer also happened to be an opponent of English imperialism, including strong denunciations of the Second Afghan War and the Boer War[13] and this remained the exception to his conservative drift as he remained opposed throughout his life.

Based on his survival-of-the-fittest views, Spencer was one of the leading proponents of laissez faire capitalism during the XIXth century.[14]

Spencer's works were rife with the ideas of biological determinism popular during his day. He attacked the notion of free will in his 1855 work Principles of Psychology.[15] His writings were known as great "contributions" to the scientific racism of Victorian England. Spencer attempted to explain the inferiority of the "savage mind" through evolutionary and phrenological means by combining them with some armchair anthropology.[16] The "Spencerian" view of evolution was teleological not only in relation to continuous progress, but differentiation and specialization. Thus, as the "savages" were "less evolved," so were their minds, which made them incapable of higher thought as their brains were less complex. He cited earlier "craniological" studies of skull size and capacity in support of this. These ideas greatly influenced the nascent eugenics movement.