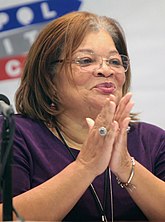 Alveda Celeste King (1951–) is an American conservative activist and author. She is the niece of Martin Luther King, Jr., a fact which she and her supporters treat like a credential, and might be described as a female Alan Keyes, in that she has a habit of sticking her foot in her mouth and then trying to justify it by citing the circumstances of her birth.

King seems to like labeling anything she morally opposes as "genocide". She is active in the anti-abortion movement[1] and has referred to abortion as "genocide"[2] because African-American women have a higher per-capita abortion rate than white women (which is more likely the outcome of economic disparity, not some kind of racist conspiracy). King views the anti-abortion movement as a "continuation of the civil rights struggle."[1] This is ironic because African Americans will be hurt more than whites if access to abortion is limited, given their higher per-capita abortion rate.

In 2010, she was involved in Pro-life Freedom Rides, an event which began with a protest at a Birmingham, Alabama abortion clinic and ended with a "pro-life service" at MLK's grave and drew its name from the 1961 protests

against segregation in the American South.[3]

In outlining her opposition to same-sex marriage at a National Organization for Marriage rally on August 7, 2010, King stated the following:[4]

During a 1998 speech at the University of North Carolina, King offered the Westboro Baptist Church argument against granting equal rights to gays and lesbians:[5]

This is not true. The Bible condoned the status quo and was even used as a means to excuse or even support slavery many times throughout history. While Martin Luther King, Jr. was a religious leader, implying that the Bible was a cause for good and ignoring its use as justification for the bad is disingenuous at best.

King at the Restoring Honor Rally

King has claimed that her uncle was a Republican.[6] However, according to David Garrow,

a civil rights historian and the author of a Pulitzer Prize-winning MLK biography, "King was not only not a Republican, he was well to the left of the Democratic Party of the 1960s."[7]

King once expressed the hope "that white privilege will become human privilege and that America will soon repent of the sin of racism," which would have been entirely reasonable if it hadn't been done during the speech she gave to an audience of Tea Party race-baiters at Glenn Beck's Restoring Honor Rally on August 28, 2010.[8]