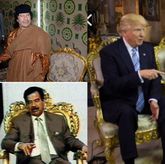 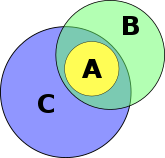 Even though A is a member of both group B and group C, not all members of B are members of group C.

This form is used when arguing for the guilt/virtue of a large group of people.

Meanwhile, this form is used when arguing for the guilt/virtue of a specific person. Here, the idea that all members of group B are members of group C is implied, rather than explicitly stated.

Using this fallacy in a positive context is called Honor by Association.

In this case, the fallacy implies that the good things that people associate with Martin Luther King came from him being a Baptist. While this may, in part, be true, it is fallacious to state that all Baptists will be good, or that someone becoming a Baptist will become good. In politics, the association fallacy is often subtly combined a priori reasoning in a manner that is clearly nonsensical when spelled out:

Using this fallacy in a negative context is called Guilt by Association.

Usually Hitler is used instead of Stalin, but Hitler wasn't an atheist...

Guilt by association typically relies on fear and pre-existing stereotypes. In the former case, many of the acts that Stalin committed are inherently fearful, but it's doubtful whether he ordered them on account of his atheism[note 1] or in the name of communism. Even if this doubt wasn't present, to attribute the negative aspects of Stalin to these beliefs is fallacious as the beliefs themselves say nothing about mass murder. This is similar to how, in a post 9/11 world especially, moderate Muslims have been faced with unfortunate associations due to the acts of fundamentalists and Jihadists. In the latter case, the fear of nuclear weapons inspired by Cold War propaganda is used to suggest that nuclear power should be similarly feared on the basis that it uses the same physical process, even though the process of fission itself is morally neutral.

An example of conspiracy theorists demonizing (no pun intended) a debunker[2]:

This is not even wrong — Galileo was persecuted not just because people disagreed, but for contradicting Catholic doctrines of the time.