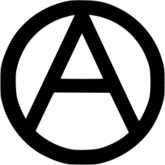 The "A" is reported to stand for anarchy. So why is it capitalized?
Not to be confused with the political philosophy of Anarchism.

Anarchy is the state of having no government. It is distinguished in political science from anarchism, the belief that anarchy, defined by them as the absence of major hierarchies such as class and the state, with power flowing from the bottom up, is the best possible system for humanity to live under. This causes confusion when self-declared anarchists protest against government cuts in public spending; however, it should be remembered that anarchists are against capitalism, wealth, and property ownership and are for the needs of the people being provided for by the collective. Another ideology exists, called 'anarcho-capitalism'; however, most other anarchists would consider this an oxymoron: it advocates anarchy, indeed, but is not anarchist.

Many political philosophers consider anarchy the original "base state" of humanity. Some then go on to say that we are much better without it.[2] Others consider the natural state to be great but impossible to return to.[3]

Anarchy is also the word used to describe a state of chaos, lawlessness and disorder, frequently seemingly brought about by the lack of government. However it is important, or at least useful, to decide at any particular time which definition is being used. Otherwise, all discussion and dialogue will descend into . . . . . . . anarchy. Anarchists are generally careful to note that "No rulers does not mean no rules," as 'no ruler' is the origin of the word 'anarchy', since many people believe that anarchy is just the removal of the current government, and absence of all law, which is the origin of this use of the word 'anarchy'.

Real examples of this include Catalonia during the Spanish Civil War, and most hunter-gatherer societies. Some anarchists would refer to the Paris Commune as being anarchistic, at least until the Blanquists began to take over. Another example is Portugal between 1910 and 1926, which saw nine presidents, 44 ministries, mass lawlessness across the country, and ended with a fascist regime in place that would rule an authoritarian Portugal until the '70s.

Many consider the failed state of Somalia to be a real-life example of this, where the southern 2/3 have been in a civil war for the last decade. There is a technically recognized government; however, that government does not have any authority anywhere in the country. Some Somalis ended up supporting a totalitarian Islamic regime just to have a semblance of order. The United States, with its ally Ethiopia, removed that regime and everything is falling back into its previous state. However, most anarchists would not accept this as being 'anarchy', as there were still rulers and major hierarchies, such as class and rule by warlords, and many would also argue that it was brought about by imperialist wars by 'First World' nations. As anarchism is a generally internationalist movement, they would also doubt the idea that since Somalia has more than one ruler within its borders, this somehow makes it anarchist, as the national borders, in their opinions, are artificial and meaningless.

However, Somalia does have a customary law system which some self-identified anarchists (particularly so-called "anarcho-capitalists") see as an example of how a stateless society can function.

Anarchy should not be confused with mobocracy, or ochlocracy as it's more technically termed. In mobocracy, there is at least some governing authority but the mob easily sways the government's decisions - effectively the weight of consensus or the assertions of strongly opinionated individuals can overrule any nominal leadership. In true anarchy, there is no governing authority whatsoever other than the people, though some forms of democracy (especially direct and decentralized) can be compatible with anarchy.

Use of the term in international relations[edit]

In international relations, "anarchy" is a term of art that refers to the state of the international system, since there is no authority that controls how states interact. (The few attempts at decreasing international anarchy, such as the League of Nations and the United Nations, have been spectacular failures due to certain nations having acquired leaders who just don't care, and who have an army to back them up - as in the United States of Mid-North America). The cornerstone of most neo-realist thought is that anarchy means that states will continue to war with each other forever. Constructivists, on the other hand, believe that anarchy is itself shaped by the norms that states adopt.[4] In this case, anarchy most definitely does not mean a lack of hierarchy; the international system is distinctly hierarchical, with the US as a unipolar/hyperpower. The state of international relations is not what anarchists mean by anarchy, they would probably argue. Instead, it features competing hierarchies and much chaos.[5][6]