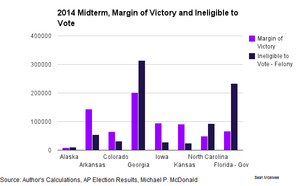 Several close Republican seats in the 2014 US midterm elections, comparing margin of victory and felony disenfranchisement.

Felony disenfranchisement is excluding persons otherwise eligible to vote from voting due to a felony conviction. It can have serious effects on the vote because of the demographic makeup of felons. For example, take the United States, where African Americans and Hispanics make up more than half of the convicted felons, are largely male and live in urban areas.[1] Removing their right to vote can have a huge impact on elections, especially closely contested ones.

Felony disenfranchisement laws and effects are most pronounced in the United States. In several other countries, such as France, Germany, Japan, Israel, Zimbabwe, Norway, Kenya, and Peru, convicted felons can vote unless their conviction is related directly to election fraud.

In the United States[edit]

There is no federal law regarding felony disenfranchisement,[note 1] so voting rights vary by state.[2] However, only Maine and Vermont grant complete voting rights for all kinds of criminals. Most other states bar convicted felons in particular ways, such as disallowing incarcerated people from voting (not all convicted felons need to serve time in prison), disallowing felons from voting until they complete their sentences (as well as some additional waiting time), or requiring a pardon from the governor. There are 12 U.S. states that bar people with convicted felonies from voting indefinitely for some crimes, or voting rights require a pardon from the governor. Iowa, Kentucky and Virginia permanently disenfranchise these people if they cannot get a governor's pardon.

Prior to the passage of Amendment 4 that granted ex-felons the right to vote in 2018,[note 2] Florida was the felon disenfranchisement capital of America, having 1.5 million Americans who were unable to vote.[3] Overall, nearly six million people cannot vote in the U.S., making them the largest disenfranchised minority in the country,[4] increased from 1.17 million in 1976.

See the main article on this topic: Jim Crow laws

Much research has been dedicated instead to current impacts of felony disenfranchisement or the moral and philosophical arguments. Nevertheless, it shouldn't be surprising to discover that laws regarding criminalization of people tend to be very racist in origin. This was the case for several felony disenfranchisement laws throughout the United States[6][7] which were part of the overall trend of laws being more punitive for criminals after Reconstruction. The 1901 Constitution

in Alabama aimed to established white supremacy in America without explicit laws that would run afoul of federal laws. Thus, John B. Knox, the president of the Constitutional Convention, tried to disenfranchise felons convicted of an intentionally vague crime of "moral turpitude".

Traditionally, Republicans support felony disenfranchisement, while Democrats support granting convicted felons voting rights. Arguments for felony disenfranchisement usually have vengeance and appeal to emotion at their core, such as "murderers who kill my family denied the victims the right to vote, so murderers should not have the right to vote," (a flimsy analogy if you think about it) or "it is morally wrong that criminals who failed society laws should participate in society."[8]

While it's appealing to think that thugs shouldn't vote, the crimes they commit are usually irrelevant to the kinds of candidates and propositions that people with felony convictions support. Not only are these arguments dehumanizing, but they also fail to consider how felonies are handed out, that some nonviolent crimes such as drug possession are considered felonies. Those opposed to granting convicted felons a right to vote also fear that they may be the difference in letting Republicans lose, although this operates on the faulty assumption that convicted felons all vote a particular way, and they try to spite and punish the Republicans who usually push for these laws. Additionally, felons are still expected to a degree to contribute to society as they're still taxed and expected to rejoin society and avoid recidivism. It's telling that the argument neglects the racial and income demographics of convicted felons that creates a possible chicken-and-egg result and that it relies on assuming suppressing votes is a good thing, especially when Republicans usually benefit from lower voter turnouts. Finally, it is overlooked that felony disenfranchisement has an ugly racist past when Black Codes

The idea isn't difficult to grasp: If you make all of the opposition convicted of something, none of them will be legally allowed to participate in the democratic process, be it voting or being a candidate (in some locations).

You, too, can establish absolute power for your party in a few easy steps!

Bonus: Since you're the one with the "tough on crime" stance, you can issue directives for how your laws are executed. If you happen to be racist, let the more racist police force do the dirty work for you.