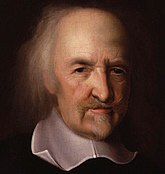 Old man Hobbes knows that the only way to live is to kill first!

Thomas Hobbes (1588–1679) was an English philosopher, physicist, mathematician, and historian.[1]

As a philosopher Hobbes contemplated the nature of reasoning, sensation, imagination, and signification. He is considered to have been an empiricist, a nominalist, and a materialist, the latter particularly contrasting his philosophy with that of Aristotle. Hobbes agreed with Aristotle, however, that reliable knowledge was gained through reason and an understanding of the relationship of cause and effect.

Hobbes taught that human beings are naturally selfish, brutish and violent and absolute government was necessary to prevent a "war of all against all". Well, he should speak for himself.

His principal work, The Leviathan (1651), which he wrote in English (and with liberal use of massive run-on sentences), advocated absolute government, either monarchy or assembly, as the best political system and believed a social contract was formed or should be formed to create that system. On a somewhat lighter note, these ideas were foundational traits of Hobbes in Calvin and Hobbes. He may or may not have been the product of Calvin's imagination.

In addition to the social contract theory, Leviathan famously introduced the concept of a "Human nature", to describe human existence before the invention of government: Hobbes guessed that this life was "solitary, poor, nasty, brutish, and short", "a war of all against all". Future enlightenment philosophers such as Locke and Rousseau took this as given, citing Hobbes. Anthropological work since has shown this to not be the case: pre-civilization human life was socially organized and cooperative.[2]

The Leviathan has a telling definition of religion:

“Fear of power invisible, feigned by the mind, or imagined from tales publicly allowed, [is] religion [...]."

This philosophy-related article is a stub.
You can help RationalWiki by expanding it.
Retrieved from "https://rationalwiki.org/w/index.php?title=Thomas_Hobbes&oldid=2461326"
Categories:
Hidden categories: