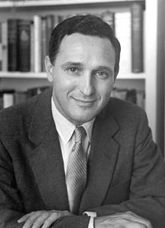 Andrija Puharich, born Henry Karel Puharić (1918–1995), was a medical doctor and a parapsychology researcher who endorsed psychic phenomena, and is credited for bringing Uri Geller to the USA.

Puharich graduated from the Northwestern University Medical School in 1946. Sometime later he became interested in psychic phenomena. He brought Uri Geller to mainstream audiences in the United States and endorsed him as a psychic. He believed in extremely extraordinary claims. Uri Geller at the time claimed that he was sent to Earth by extraterrestrials.[1]

According to James Randi, Andrija Puharic enjoyed getting high on mushrooms, which Randi thinks may go a long way in explaining some of his beliefs.[2] Puharic wrote a book about Uri Geller called Uri: A Journal of the Mystery of Uri Geller, in which he supports the idea that Uri Geller is a genuine psychic validated by science.[3] He was granted several patents for his discoveries.[4][5] His son runs a website dedicated to Puharich.[6]