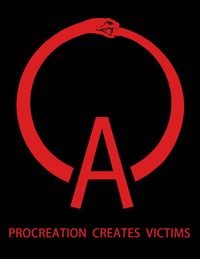 A snake being stopped from eating its tail is a common anti-natalist symbol and is supposed to be a metaphor for the goal of their philosophy.

Anti-natalism, alternatively antinatalism, is the ethical position that creating life (in the case of humans, giving birth), is immoral and should be abstained from.[1]

Anti-natalists take the position for many reasons and it has become a more mainstream philosophical discussion as of late. Famous anti-natalists include Arthur Schopenhauer,[2] David Benatar,[3] Emil Cioran,[4] Thomas Ligotti,[5] and Sarah Perry.

Anti-natalism stands directly in conflict with Judaism and Christianity, owing to how both religions attempt to promote natalism, using God as a vehicle to do so (Genesis 1:22, Genesis 1:28, Genesis 8:17, Genesis 9:1, Genesis 9:7, amongst others). Unsurprisingly, it also stands directly in contrast to many "values" promoted by the religious right, notably family values and "pro-life", owing to how those heavily promote natalism.

One of the most common arguments for anti-natalism is a simple one: life just isn't worth it. Most of the time being argued from a utilitarian standpoint, this position is a traditional bit of philosophical pessimism, most famously implemented by Arthur Schopenhauer.[2] Anti-natalists utilizing this position will usually claim that the overall suffering of the world greatly outweighs the overall pleasure/utility.

Naturally, this is an incredibly counter-intuitive thought for most people and some just reject it outright. To some anti-natalists, this is the consequence of massive biological and cultural optimism bias. This optimism bias pertains that people tend to suppress/downplay the negative experiences in their life and focus on the positive ones.

When it comes to the position of general pessimism, it's very tricky to argue with since it is fairly subjective. Finding objective standards for what constitutes pleasure or pain, how to weigh each, and which is more important is very difficult, perhaps impossible, so finding empirical grounds to argue is out of the question. Though anti-natalists understand the problem of argumentation just as well and usually rely on appeals to intuition, such as "Do you really think that the goodness of the world outweighs the tremendous suffering caused by the numerous plagues and famines?"

Negative utilitarianism is divided into many groups, some disregarding the benefit of pleasure as a whole. Though outside of anti-natalistic and pessimistic aims, there is some benefit to negative utilitarianism. First and foremost, it helps solve a lot of problems thrown at basic utilitarianism. One problem, for instance, is the scenario where a group of people torture (or rape), someone for their own pleasure, and since it's a group, the pleasure gained might outweigh the pain experienced, and hence, is moral. A negative utilitarian would argue that fundamentally their pleasure is meaningless since it is not necessary nor something that someone is owed. On the contrary, they would argue that the victim doesn't necessarily deserve the pain they receive and that reducing that suffering should come first.[6]

Anti-natalists use negative utilitarianism as a justification for their philosophy since if we have an imperative to reduce/prevent suffering first and foremost, we should stop procreating.

A signature argument for anti-natalism is Benatar's "asymmetry" argument. This argument is most famously used in Benatar's book "Better Never To Have Been: The Harm of Coming into Existence", which is possibly the most popular anti-natalist text of all time.

The argument tries to prove that when weighing the benefits of existence versus non-existence, there is an asymmetry that favors the side of non-existence. The logic follows as such:

Using this reasoning, Benatar comes to the conclusion that non-existence is preferable to existence. He runs with the asymmetry into many directions. He applies general pessimism and assumes that the suffering caused by existence outweighs the pleasures, so within the asymmetry, non-existence is absolutely preferable. He applies a bit of negative utilitarian thinking and asks us "is the prolonged existence of suffering made up for by the pleasure experienced?".

Many environmental reasons have been invoked for antinatalism. These include overpopulation, climate change, and others. These reasons are conveyed primarily by the Voluntary Human Extinction Movement, which seeks voluntary human extinction because human existence is immoral from an environmental perspective.

One notable group of anti-natalists is the subreddit r/antinatalism.[8] The subreddit is generally comprised of unfunny memes, making fun of people with kids, and sometimes genuine discussion of anti-natalist theory (sometimes). Most casual anti-natalists are merely depressed teenagers who have developed a disgust for reality, and in turn, their parents. Though of course, that's not everybody and it's just a generalization that tends to be true. The main issue of the subreddit is the fact that they're way too spiteful to ever get anybody on their side, so for now, anti-natalism is seen as a non-serious philosophy and its supporters are merely seen as people who are angry at the world.

There has been notable drama on the subreddit, and sometimes they don't always work as a hivemind. For instance, the subreddit has had many instances of conflict on the topic of veganism.[9]

If you want purely theoretical conversation/a much more mature and serious environment, r/TrueAntinatalists[10] is a much better option.

To be expected, there has been a lot of pushback against anti-natalism as an ethics. Most notably, Jordan Peterson actually debated David Benatar and it was one of the greatest examples of Peterson's charlatanism. Even if you're opposed to anti-natalism, it is incredibly clear to see that Peterson was completely unprepared for the debate.[11]