From RationalWiki
(Redirected from VHEMT)
Jump to: navigation, search

The Voluntary Human Extinction Movement or VHEMT, pronounced "vehement", is a loosely knit movement that, as its name suggests, calls for a stop to human reproduction, which will eventually lead to human extinction. This movement argues, correctly, that peoplekind humankind is responsible for causing tremendous environmental and ecological carnage. Their official motto is, "May we live long and die out."

So far, there is no indication that the movement is going to be very successful.[1]

It is no doubt that humans have had an impact on the environment and it's living creatures especially within the last 200 years. With the coming of more environmentally conscious generations we are trying to amend what we have fucked up. However, according to VHEM, that is not enough as we need to allow earth to return to its non-human state by slowly stopping more humans to be created. Somehow this is seen as a 'natural' state despite the fact that human beings still evolved through natural processes on earth.

They also point out that we are currently the cause of a extinction level event which is true, however there are other groups that are encouraging more proactive ways of stopping this via trying to make the government pass tighter legislation in regards to both climate and preserving biodiversity.[2] They claim that continuing to develop our societies and industries can result in more negative externalities, such as pollution and the continued consumption of animals. Although it seems that society is slowly heading in a greener direction, VHEM argues that at some point we could go back to environmentally destructive ways,[3] they don't really give a reason how or why that would happen but the whole ideology is based on a pessimistic world view.

It could be argued that not reproducing is actually an altruistic choice as it will prevent future human suffering for people that didn't have a choice to come to into this world. This negates the possibility that the hypothetical future humans could have fulfilling and overall happy life or even the possibility that one of the hypothetical humans finds a magic solution for all world's problems. Very far fetched but it's a similar principle as the claim of this act being altruistic, either way no one knows whether the future people would have blissful or terrible lives so the claim itself is just a subjective hypothetical. 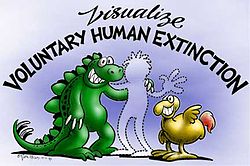 VHEMT Supporters agree that we need to stop breeding as humans are overpopulated, but do not agree we need to go as far as extinction. They believe we should all cease breeding until humans have reached a "sustainable" population. Meanwhile, VHEMT Volunteers see extinction as the only sure way to avoid breeding ourselves back to today’s density.[4]

The Voluntary Human Extinction Movement does not advocate murder or suicide. Instead it advocates non-reproduction (not birth control, no births whatsoever) so that human beings will eventually disappear. Once humanity is gone, the world will apparently return to a "balanced state" and evolve more peacefully and naturally (because humans are the only mean

So far, it's not abundantly clear that these assumptions hold well enough to justify the extinction of the human species, even if it is voluntary and the practical considerations already discussed can be ironed out. Certainly the final factor — that voluntary extinction is the only solution of the issue — is far from proven. While so-called "magic bullet" technologies may not deliver, the changes that need to be made to human attitudes and actions to help the environment are well inside the realms of possibility. And if they're not, the human race will go extinct anyway so there is little point in coaxing it too early.

Other main factors are very subjective, the idea of human civilization as being "unnatural" or whether the Earth in a "natural" state is in fact better aren't easy questions to answer, and there may not even be a way to logically define a correct answer. Mass extinctions happen all the time by "natural" means, and if a "natural" extinction is defined as a species not being able to adapt quick enough to its surroundings via natural selection, then human impact on the planet is no more out of the ordinary than any asteroid impact. Similarly, the assumption that another species will arrive and build up a high level of environmentally-damaging technology is equally up in the air as an argument, you just cannot create a definitive and logically coherent answer.

In short, VHE is a very extreme solution and is by no means a practical or palatable one — it can easily be envisaged that more people would choose not to have children for their own, personal reasons than reasons of achieving VHE. If it was achieved, however, it would take thousands (if not millions) of years for human activity to be wiped completely away by the ravages of time and for the world to revert to the "natural" state claimed by supporters of human extinction. However, following human extinction, no sapient beings would be around to judge whether the planet is a barren wasteland or a dense jungle. Furthermore, human civilization 1.0 has already depleted the planet of quite a few useful resources, most crucially fossil fuels. These recover extremely slowly if at all, and if another civilization is formed as a result of the great apes evolving another intelligent being in a few million years, not at all unlikely, this new civilization would likely be stuck in the early industrial era for a long time, and would probably drive sperm whales extinct to steal their oil, since the only oil in the ground would be unusable or buried at inaccessible depths, and the likely result is that civilization 2.0 would be even more ecologically devastating than ours.

In essence, this is just the Christian idea of a fallen world, with humans cast as the Satan figure who must be vanquished before there can be a return to paradise. It's quite an apt comparison especially considering that Knight himself compared the then 'natural' state of earth to the Garden of Eden.[5] The minor 'Sun is going to explode eventually' issue kind of torpedoes the whole thing.

Efilism (life spelled backwards) is an offshoot of the VHEMT which not only argues that humans should not only bring about their own extinction by not reproducing, but that the last humans left alive should deliberately cause a mass extinction event that would result in the extinction of all sentient life, in order to prevent the suffering that inevitably affects all sentient animals, whether from hunger, being eaten alive or otherwise attacked by other animals, cold, thirst, disease or any other cause.[6]