The anthropic principle (AP) is an oft-misunderstood[note 1] philosophical proposition that has many variations. Two commonly cited variations are Carter's weak and strong anthropic principles. The weak AP states that humans live in an inherently unique part of the universe, because humans require unique conditions to live and exist. The strong AP essentially states that our universe and its fundamental constants must exist, at some point in the universe's history, in such a way that it allows the creation of observers.[2] In other words, in order for the universe to be observed, the universe must exist in a state that allows observers to exist.

Carr and Rees[3] argued that although there appear to be myriad so-called anthropic coincidences or constants (anthropic requirements that appear to be "fine-tuned"), only four are especially critical. These are me (mass of the electron), mu (mass of the up-quark), md (mass of the down-quark), and g, the Grand unified coupling constant that determines the strength of the strong, electromagnetic, and weak forces. Taking this line of reasoning a step further, Kane and colleagues[4] proposed that,

According to Stephen Hawking, there is a 98 percent chance that a universe of a type such as ours will come from the Big Bang.[5]

Illustration of the Weak Anthropic Principle[edit]

Yes, let’s ignore all that and assume that the Earth is a perfect place to support life. Let's for a moment wrap ourselves in a blanket of ignorance and arrogance and assume that the Earth, and the universe, were designed clearly just for us. Unfortunately, most of the Earth is off-limits to human life. Take us above 8,000 meters above sea level and we will slowly die from depressurization and lack of oxygen. Going below 2,000 meters below sea level and we will slowly cook from the heat of the Earth’s interior. It turns out that less than one-half of 1 percent (0.46%) of the earth’s total volume is capable of sustaining human life—meaning that, even if we manage to imagine that the Earth is Eden, we know it is not. More than 99.54% of it would kill us rather quickly.

But this is just Earth; perhaps the solar system around us would be more suitable for us. Actually, the answer is no. Go outside of the Earth’s atmosphere and you would quickly die in the vacuum of space. And if the 0 pressure did not get you, the scorching heat in the Sun, the freezing cold in the shade, or the cosmic radiation would kill you quickly.

What about all those other planets? Well, you would burn or freeze on Mercury, freeze on Pluto, suffocate and then freeze on Mars. There is no place to stand on Saturn, Jupiter, Neptune or Uranus, and their moons are lethally cold. On Venus, you would be cooked and crushed to death in short order.

If you think these examples are ridiculous, then you would agree that so too is the argument that the universe is fine-tuned for life. It does not take a genius to realize how absurd and flawed this argument truly is. If this is the best it could possibly be, if this is the best environment using the natural laws of the universe that could allow human life, then it seems that the creator is not as all-powerful after all, or perhaps is not as well-disposed toward us as he is made out to be.

Let us also ponder the enormous waste of matter. The hundred billion galaxies, each with the order of a hundred billion stars, are composed mostly of “atomic matter”, that is, chemical elements. The portion that is luminous, that is, visible to the eye and optical telescopes, constitutes just one-half of one percent of all the mass in the universe. Another 3.5 percent of the matter in galaxies is of the same atomic nature, only non-luminous. Just 2 percent of atomic matter is composed of elements heavier than helium. One-half of 1 percent of this is composed of carbon, the main element of life. That is, 0.0007 of the mass of the universe is carbon. Yet we are supposed to think that God specially designed the universe so it would have the ability to manufacture, in stars, the carbon needed for life? 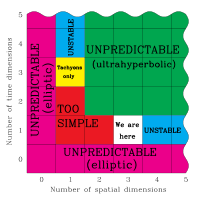 There has been research that shows the 3 spatial dimensions + 1 time dimension of our Universe is the only one configuration where life as we know it and capable to develop a technological civilization could exist. Change the number of space dimensions and you either cannot develop complex, biological or not, systems or orbits from planetary ones to electron orbitals are unstable. Toy with the number of time dimensions and you cannot predict how a system will evolve with time (ie: no possibility to develop technology), plus the possibility of protons and electrons becoming unstable.[6]

Life, the Multiverse, and Everything[edit]

The anthropic principle has often been presented as (indirect) proof of the existence of many universes. The argument basically states that if there are, as for example some versions of inflation propose, a whole lot of Universes out there with different physical constants, laws, number of dimensions, etc. it's possible that just by blind luck a Universe like this could pop up even if countless others were totally inhospitable to life (including "life" in the broadest sense), no matter if physical laws and constants left very little margin for variations in order to have a Universe suitable for life.

However the multiverse hypothesis is unfalsifiable and proofs presented of its existence are indirect at best. Note also that, for example, within the parameter space defined by the constants that allow the existence of stars there's some room to have some variation of said constants (not to mention the possibility of exotic stars).[7][8]