From RationalWiki
(Redirected from Archeology)
Jump to navigation Jump to search

A typical archaeological "dig"
Not to be confused with the pseudoscience known as pseudoarcheology.

Archaeology, or archeology, is the science of digging through other people's abandoned crap in hopes of finding some food or useful object (no, that's probably homelessness, or freeganism), or garbology

in order to figure out how and (if possible) when they lived. In all seriousness though, it the scientific establishment classes archaeology as subdiscipline of anthropology[citation NOT needed] which studies the human past through its material remains. Archaeology is a very much interdisciplinary field - it merges geology and biology with cultural anthropology for the highly scientific sake of digging through dead people's garbage and homes.

In contrast with sensible construction workers, archaeologists use the smallest possible tools to move the largest possible amount of dirt. The crap that archaeology studies is usually buried under craploads of dirt. As a result, archaeology takes a crapload of time. Not only does it take a crapload of time, if you fail to find anything then you are effectively an extremely overeducated ditch-digger. And if you do find something, it's always a series of small walls.[note 1]

Archaeologists excavate sites of previous human habitation, and sometimes piss off the locals by digging up their forebears' graves and shipping the cool stuff that was buried with them to a museum in Europe. This latter habit has lessened of late, and slightly more honor and respect are now paid to the neato bones and stuff that they find. In some cases, they move the museum to the dig site to make things easier.[note 2]

One of the most important parts of archaeology is documentation. If documentation is questionable (or worst nonexistent) then an artifact looses much of its vital information.

Provenience ('in situ') is the three-dimensional location or find spot of an artifact or feature within an archaeological site.[1] while provenance is an object's complete documented history. Provenience is especially crucial as not only does the actual location need to be noted but any evidence of possible changes to the stratigraphy. This is followed up with the actual history of the object from the point of its excavation to the present day.

In addition to provenience, archaeology has other methods of dating objects and events. For the periods prior to recorded history, radiocarbon dating is an option, though certain limitations to this method are apparent.

, so doubling the range to two standard deviations (2σ) has a 95% chance of being right, and tripling the range to three standard deviations (3σ) has a whopping 99.7% chance of being right. Crucially however, nearly all dates must be calibrated, as the ratio of Carbon-14 to Carbon-12 in the atmosphere has not always been constant — a basic fact of chemistry, also relevant to why scientists know global warming is occuring.

The closer a finding is to the present, the more important this range becomes — thus, any C14 date within the last 3,000 years without its range (a common occurrence) is not overly helpful, and provides us with little in terms of actual precision.

Ultimately, recorded history remains (by necessity) the primary resource by which archaeologists catalogue their findings, resulting in the subprofession of historical anthropology — which tries to form a theory of how the people of a particular time and place saw the world (e.g. via interpretation of their written records).

When the trowel is too blunt of an instrument, used dental tools, preferably those that are no longer usable by a dentist, can be applied to the dirt.

Archaeologists carefully scrape through layers of accumulated dirt and other debris, sifting carefully through the material to find their precious artifacts. They carefully measure exact locations and depths, and carefully note varying layers as they dig down, in order to produce voluminous carefully written reports on what they have found. Then they carefully compare notes to form hypotheses about all manner of aspects of the lives and times of the people they are carefully investigating. The use of fire through the ages for cooking food and whatnot has left layers of charcoal that can be used to carefully date the remains with which they are carefully associated. 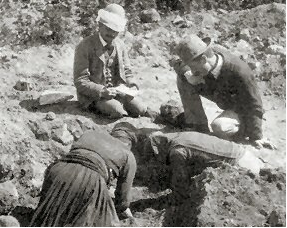 In the UK a popular TV programme Time Team has greatly increased the exposure of archaeology. The team of about five regular members and sundry assistants/labourers is interpreted by Baldrick from the Blackadder series Tony Robinson. They have three days to examine a site (Why three? — who knows?) and pretty pictures are used extensively throughout the show to help the audience visualise the site as it once was.

There are some examples of real life archaeological bad-assery that helped popularize the field as well. Mortimer Wheeler is probably the most famous. He was a World War I veteran turned archaeologist, best known for his work on Roman Bronze and Iron Age sites, his appearances on "Animal, Vegetable, Mineral?" and for being a playboy. He also invented the Wheeler grid, which is still standard in the field today. (That's fancy-talk for digging squares along a line. Pretty bad-ass, huh?)

There are various different theoretical approaches through which archaeologists interpret the past. The various schools of thought within mainstream archaeology (as opposed to pseudoarchaeology) include:

The culture-history approach essentially formed the basis for modern archaeology. It is defined by the grouping of various site and artefact types into different 'cultures'. While the approach acts as a fairly decent 'rule of thumb', the fact that such artefacts were often traded extensively means that this method of analysis risks oversimplification. The Marxist archaeologist, V. Gordon Childe, is generally associated with this approach. Culture-history has generally been superseded in the west by processual and post-processual archaeology. However, it remains influential in areas comprising the former Soviet Union.

Processual archaeology, sometimes referred to as 'the new archaeology' is generally considered a reductionist methodology. The movement grew out of the United States, and is strongly associated with Lewis Binford and his students. Processualists wished to adopt a more scientific approach to archaeology and the aims of the movement were outlined by Binford in a paper entitled 'Archaeology as anthropology'. Processualism borrows the ideas of hypothesis and the scientific method from the natural sciences.

Archaeology is a very fragmented profession with some areas still using theories (such as as Imperial synthesis[2] and historical particularism) which have been abandoned as obsolete in other regions. Another problem is due to social-economic factors the proper methodology is not always being used. For example, the quality of field work around the world ranges from reasonable to effectively bordering on pseudoarchaeology.[3]