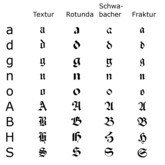 Fraktur, also known as "Frakturschriften" or "Gebrochene Schriften" (literally "broken script" in English), is the collective name for a number of blackletter (script) typefaces used in Europe, particularly in Germany, from the 12th up until the 20th century. The historical roots of those typefaces can be found in the Gothic art that was replacing the earlier Romanesque style in the 12th century. Just as the Gothic art replaced round forms with sharp, rectangular lines, written letters transformed from the round Latin letters to straight, angled ones.

History and connection with Nazism[edit]

The typeface style emerged in the 16th century and is just one of several "Gebrochenen Schriften", although it is often used synonymously with that term. Other related typefaces are, for example, Schwabacher, Rotunda, or Textura.

Fraktur was the most widely used typeface for printed publications in the German-speaking countries from the 16th until the 20th century. Its use started to decline somewhat in the late 19th century, when numerous publications, especially those that wanted to reach foreign readers, started to use Roman typefaces instead. The Nazis revived Fraktur, which they denominated the "German font", until, in January 1941, Fraktur was banned in a Schrifterlass (edict on script) signed by Martin Bormann

Jewish letters"). The reasoning behind this order is unclear, with some scholars citing Hitler's apparent dislike for Fraktur and related typefaces and others stating that it was meant to simplify communication in the occupied territories.

Although some singular writings continued to be published in Fraktur up until the 1960s, the Schrifterlass effectively ended the use of Fraktur in Germany. However, they are used on neo-Nazi sites (e.g. Stormfront), who apparently love using Judenlettern now.

Blackletter or gothic fonts, including fraktur, are still in use in logos of newspapers, and in contexts that want to signify tradition (for example pubs and bakeries). It is also common in some subcultures, from hooligans to rockers, and more recently even hip-hop. Since blackletter fonts often look similar to laypeople, a Fraktur does not always reference Nazism. However, in subcultures, the intention is still to convey an edgy "german-ness", as the popular use of the metal umlaut