God of the gaps 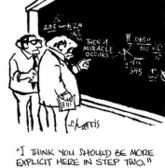 God of the gaps (or a divine fallacy) is a logical fallacy that occurs when believers invoke Goddidit (or a variant) in order to account for some natural phenomena that science cannot (at the time of the argument) explain. This concept resembles what systems theorists[1] refer to as an "explanatory principle".[2] "God of the gaps" is a bad argument not only on logical grounds, but on empirical grounds: there is a long history of "gaps" being filled and the remaining gaps for God thus getting smaller and smaller, suggesting "we don't know yet" as an alternative that works better in practice; naturalistic explanations for still-mysterious phenomena always remain possible, especially in the future where research may uncover more information.[3]

For the less religious, substitute God with another thing-you-don't-understand (real or imaginary) and get an application of a different didit fallacy. For example, the idea of quantum consciousness relies on quantum-mechanics-of-the-gaps.

The human brain appears to be hardwired to find causes for any "effect" experienced in the world, from eerie sounds, to scary thunder, to terrifying ground shakes, and deadly diseases. Early humans, just beginning to seek explanations for natural things they experienced in their world, found answers by saying those things were caused by gods, or other supernatural figures (like ghosts or witches); many early "gods" are storm gods (such as Thor) or gods of the wind (the kami, in Japan). The very act of birth was apparently seen as magical and godlike.

But as humans explored more, they found naturalistic answers to simple things they once attributed to gods. As humans developed a simplified scientific method, more "gaps" were filled with naturalistic answers. God or the supernatural were no longer needed as an explanation for those items. And finally, as science took hold of humanity's quest to understand the world, each advance in scientific knowledge reduced the area where a divine power was necessary. Galileo and Newton undid the idea that planetary motion was accomplished through the efforts of angels. Lightning was revealed to be an electrical buildup and discharge in the atmosphere. We learned that earthquakes were shifts in the plates of the Earth's crust. Even things not yet proven can be shown to have likely or possible natural causes. For example, the discovery by astronomers of organic molecules in space revealed that life on Earth had a possible explanation that did not (necessarily) involve a creator god.[3]

See the main article on this topic: Argumentum ad nauseam

When each gap is filled, the believer is forced to jump to the next gap. This game can continue ad nauseam, since human knowledge will never be able to explain everything (by definition of infinity, and by principles such as Gödel's incompleteness theorems). However, the argument is an instance of the logical fallacy of argument from ignorance.

The ultimate "gap" that likely cannot be bridged is "well, God started everything", because even if something like the M-theory

explaining how our universe could have "big banged" in the first place was proven to be true someone could always ask, "yes, but what created the membranes?".

Creationists generally declare that, rather than filling a gap, a new piece of information simply generates two gaps, one on either side of the newly-established fact — meaning that additional information is understood to diminish the observational base of a theory. As such, increases in knowledge would paradoxically increase human ignorance.

See the main article on this topic: Appeal to omniscience

The God of the Gaps argument indicates enormous conceit because, by implication, a believer indicates that he (or she) has understanding of all there is, except those things God did, and therefore declares that a miracle is necessary to make him (or her) fail to understand. It needs hardly to be said that this belief system has little to do with observation, and much to do with blind belief in the unknown.

Devaluation of theists' idea of God[edit]

For theists the weakness of "God of the Gaps" methodology is that their arguments for the existence of God are weakened every time scientists fill the "gaps" with real knowledge.

In an attempt to sidestep this problem Howard J. Van Till

, a theistic evolutionist, proposes viewing the whole evolutionary saga as a pointer to a creative and generous God.

However this is just "Goddidit" on a slightly larger scale, and secondly not all the gaps into which God is shoehorned exist in the theory of evolution.

One of the more prominent examples of current "God of the Gaps" thinking is the Intelligent Design movement, which claims that some aspects of how life formed are impossible to explain — not only with today's scientific knowledge, but ever.

Another well-worn God-gap is that of abiogenesis. Again, as there is no generally accepted explanation for the appearance of life on the planet, the position that Goddidit is taken as default by creationists.

The God of the Gaps argument finds what is perhaps its most popular manifestation in ideas about first cause. Ultimately, some people will always believe that something cannot come from nothing, and that any scientifically explained manifestation/creation of our Universe will require that something "caused" it to exist. There is, of course, rarely a serious question of what caused the causer, or who the causer is Nor do they usually seriously consider a non-divine cause or causes.

Amusingly, Gödel's incompleteness theorems prove that God will always have a little gap left to hide in, no matter how much humanity learns, but if God is used to fill that gap, there must be an inconsistency.

Because many of the people using this tactic are fundies they often have a loose understanding of modern science. This produces an interesting phenomenon where the person trying to discredit science refers to a scientific principle that is well understood. A famous example of this is Bill O'Reilly's declaration that ocean tides were an unexplained phenomenon, implying the Almighty willed the oceans to move.[5] This error is hilarious, as the cause of tidal movement has been well understood for centuries. Another less famous, but still incredibly hilarious example comes from one of SpiritScience's videos, were we see a mixture of falsehoods and facts that could easily be explained by a ten-second Google search, such as capillary action or surface tension.[6]

When confronted with questions about a global flood, even seemingly rational people will resort to the God of the Gaps hidden under flowery language. For instance, one might ask, "How did Noah suddenly have advanced knowledge of calculus to build such a ship? And how did Noah even manage to lift beams that must have been bigger than 50.8cm by 50.8cm (that's the size they used on the Wyoming, the largest wooden ship ever built)?" will likely elicit the response, "Well, as for the beams, it seems likely, even probable, that God would have helped Noah along. Along those same lines, it wasn't that Noah learned calculus, it was just that he was following God's instructions". Clearly a solid argument to explain valid arguments against the Flood.

Some creationists (for example Werner Gitt, in Did God Use Evolution?) try to refute this refutation of their arguments by saying that for them, God is not just a gap filler.[7] But that is beside the point. For anyone switching to creationism because of the God of the Gaps argument, God would be. This is why the argument does not work.