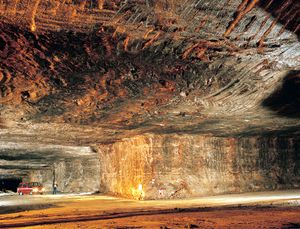 Oceans formed over the course of millions of years after the shiny new Earth cooled enough for water to settle on its surface and to fill up the shallower bits. As the crust drifted about, continents and supercontinents formed and re-formed; the spaces in between these land masses would become individual seas. Pangaea, the most recently-formed of the supercontinents, split up between 250 and 150 million years ago,[note 1] dividing the large Tethys ocean[1] into several smaller oceans. The Atlantic Ocean is the youngest of these; as measured by the record of changes in the magnetic field in the rocks below it — it is thought to date back less than a hundred million years.

In historic times, the oceans posed an insurmountable barrier to most cultures. During the Middle Ages, better shipbuilding techniques finally enabled regular and relatively safe crossings. As a result, five or six small countries on the northeastern Atlantic coast[2] succeeded in carving up most of the world into a few massive "sea-borne" empires, the consequences of which remain readily apparent today.

According to some Young-Earthers, the amount of salt in the oceans suggests that seas formed up to 62 million years ago.[3][4] The Young-Earthers make their argument based on a starting point of zero salt. False assumption — the oceans actually once had more salt than they have today. This is due to the fact that a large amount of salt is deposited on the shore when seawater evaporates outside of the ocean — the first great lowering of salinity occurred in the late Precambrian - 1 billion to 541 million years ago - when huge amounts of salt were deposited in Neoproterozoic evaporite basins. These deposits result in a mineral known as "evaporite".[5] If you like bikes, you'll love the long-term global ocean salinity cycle.[6]

Oceans store 90% of the "additional" energy retained by the greenhouse effect. Even years that are not "hottest on record" for surface temperature changes tend to be "hottest on record" for the oceans. [29]. In addition to this, sea level rises and ocean acidification are among the most prominent and damaging long-term consequences of unchecked climate change.