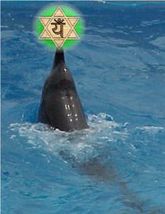 Chakra balancing: you're doing it wrong.

Dolphins come from Miami, Florida and generally are this annoying gorgeous teal color, which ticks off some cetaceans

[Note 1] who happen to live near the dolphins.

The Baiji (Lipotes vexillifer), a Chinese freshwater dolphin now believed to have been delicious.

Patient zero for dolphin woo appears to have been John C. Lilly,

who experimented with dolphin communication while on ketamine in between getting the CIA to buy him LSD. Lilly designed a semiaquatic office that a female lab assistant could work in alongside the dolphins they were trying to teach linguistic communication. One of the dolphins eventually made it clear he wanted to have sex with her. It was discovered the dolphin actually performed much better on the tests when his linguistics teacher sexually satisfied him. Strangely, as soon as word got out about the incident, Dr. Lilly's funding and reputation were lost.[4]

Many dolphin supremacists believe they are all intelligent and beautiful and peaceful; however, like many humans, dolphins are known to be vicious predatory bastards who will rape a wide assortment of creatures to death with a smile.[5]

Dolphin woo was parodied in one South Park episode where the character Gerald Broflovski idolizes dolphins and asks Dr. Biber

for "dolphinoplasty" surgery to become one.

Dolphins are vicious assholes who, like humans and house cats, murder other animals for fun as opposed to for food or territory. They have been witnessed bludgeoning their young to death.[11]

Among their wide assortment of assholish behaviors are intense ethnic cleansing campaigns against porpoises.[12] Since porpoises are, among other things, too small to threaten dolphins, it seems dolphins are just sociopaths who know that nothing in the ocean and no human beings outside Japan and Denmark will ever take them to task.

Due to evolution being a cruel bastard, female bottlenose dolphins won't ovulate when rearing young, so male dolphins may murder her baby in order to later rape her.[13] This makes dolphins second in evil only to ducks.

Incestuous pregnancy is not uncommon amongst younger females, though this is less due to a choice to commit incest and more that the young females are not strong enough to resist rape by local males, which includes the male that raped her mother.

Ichthyosaurs are not dolphins, but an excellent example of convergent evolution due to having lived in the same environmental niche, except hundreds of millions of years earlier. They were marine reptiles that were not dinosaurs, but coexisted peacefully with them. They died out around 90 million years ago. As colors are usually not preserved in the fossil record, the telltale sign which is which is the direction of the tail fin.