From RationalWiki
(Redirected from Pangaea)
Jump to: navigation, search 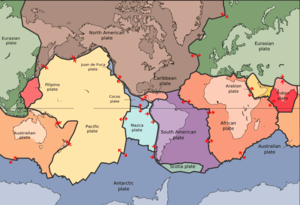 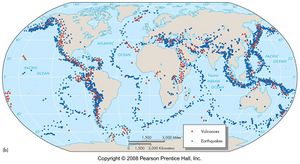 Map of the world's earthquakes and volcanoes. Note the similarities between the two maps.

of the mantle. They float because the siliceous material that makes up most of the crust is less dense than the mantle,[note 2] and can move around because the asthenosphere below them is relatively weak.[note 3]. While a "new" theory, dating only from the 1970s, plate tectonics is widely accepted for its explanatory and predictive strengths. The theory of plate tectonics can explain a wide variety of observations in geology, including volcanoes, earthquakes, continental drift, geomagnetism, and seafloor spreading.

Where plates collide, mountain ranges are often thrust up, sometimes due to compression such as with the Himalayas and other times due to uplift and volcanism at subduction zones as is the case with Andes. Where plates move apart, new material from the mantle rises up to fill the gap, creating new crust that makes up mid-ocean ridges, with the Great Rift Valley in east Africa being one of the few cases of this occurring on land. The crust is returned back to the mantle in subduction zones like the Mariana Trench, where one plate sinks under another it is colliding with. Thus the planet's oceanic crust is continually "recycled" to and from the mantle. As a result oceanic crust tends to be relatively young - the oldest ocean crust is 200 to 300 million years old - while some continental crust is as old as 4 billion years. Where plates move laterally relative to one another, major earthquake faults develop. The San Andreas fault in California is one of the most famous of these.

will emerge tens of thousands of years from now. Some other examples of well-known hotspots include Yellowstone and Iceland.

(1880-1930) put forward the hypothesis of continental drift. Mapmakers had noted centuries before that continents across the Atlantic Ocean (especially eastern South America and western Africa) seem to fit together, but Wegener was the first to suggest that the continents moved over time. Although Wegener presented scientific evidence for his hypothesis, he could not explain what forces drove plate motion [note 4] and the mechanism he proposed (continents "plowing" through the ocean floor) was correctly seen as impossible.

Wegener's theory was widely rejected during his lifetime, not least because Wegener insisted on the aforementioned impossible mechanism. Geologists also avoided the evidence that Wegener did have, something now considered to have been a mistake.[note 5] It did not help that geologists saw Wegener, a professor of geophysics but a climatologist by profession, as an outsider trying to overturn all the established knowledge in their field.

During the 1930s, the US Navy conducted oceanic mapping surveys using sonar but largely kept the data secret. One of the researchers who conducted that work, Harry Hammond Hess

(also known as Henry Hess), later became a professor of geology at Princeton University, where he continued to study oceanic survey data.[1] Hess was one of several people who described the modern theory of plate tectonics, but the Navy's secrecy likely delayed the description and acceptance of plate tectonics for decades.[1]

During the 1950s and 1960s interest in continental drift was rekindled as geologists discovered several additional lines of evidence. Ocean floor mapping revealed a massive mountain range that encircles the world[2], and scientists studying magnetic anomalies and samples from ocean drilling found that new seafloor was being created along the mid-oceanic ridge. From then on, continental drift became incorporated into the theory of plate tectonics, which is now as fundamental to geology as evolution is to biology. Where Wegener suggested that the continents were blocks of crust plowing through the ocean floor, in plate tectonics the ocean crust acts more like a conveyor belt that drags the older and more stable continents around.

The reason why plate tectonics is such an effective theory is because it explained a wide variety of evidence that geologists had been building for years, as well as having predictive power for discoveries made since. Most of our entire current understanding of geological events like earthquakes and volcanoes is based on our understanding of plate tectonics, which is why it might be surprising that the theory was developed only after things like relativity and quantum physics. Still, it took a few discoveries to fully establish the theory, as well as some observations that had been going for centuries.

A map with colors representing the age of oceanic crust.

Perhaps the most important discovery to the theory was that of seafloor spreading. Geologist Harry Hess

had been a submarine commander during World War II, and during his missions he discovered hundreds of undersea mountains in the Pacific. Later, a massive ridge was found in the middle of the Atlantic Ocean. Soon, a canyon would be found in the middle of the ridge,[3] which would inspire Hess to revisit the data and in 1960, published his theory of seafloor spreading — and unlike Wegener, he could provide a geological mechanism.[4] Later discoveries would provide more evidence, most notably the discovery that magnetic reversals and the age of the ocean floor are symmetrical along the ridges.[5] By this point, most geologists had accepted the idea of continental drift.

A map of the depth of the foci of earthquakes as you move westward in the Kuril Islands.

Obviously, this still left many unanswered questions. They knew how crust was created, but is crust destroyed as well, or does the Earth just expand over time or get more compressed? The answer to these questions was discovered by seismic imaging. There are two kinds of seismic waves: s-waves which cause shaking (think the motion of a shaking rope) and p-waves which expand and compress the ground (which are more similar in motion to a slinky). P-waves are faster and can travel between any form of matter, while s-waves only travel through solids.[6] Both of them will travel at different velocities through different densities of matter and can be recorded using instruments such as a seismometer. By collecting a lot of data, a map can be made of the underground.[7][note 6] This is where the important discovery came in: people were able to find slabs of oceanic crust pushing below the surface in volcanic places such as the Marianas.[8] This led to the discovery of the mechanism in which oceanic crust is destroyed, which is subduction zones, where old oceanic crust is pushed below continental or less dense oceanic crust, and also led to a greater understanding of the formation of volcanoes in this region, as the water in the sinking oceanic crust results in the melting of rocks and by extension volcanism.[9]

Location of volcanoes and earthquakes[edit]

The Hawaii-Emperor seamount chain provides a record of the movement of the Pacific Plate.

One of the more obvious evidences for plate tectonics, and one that was known for years, was that earthquakes and volcanoes typically don't occur randomly; most of them tend to occur in lines. The Ring of Fire

around the Pacific Ocean that contains two thirds of the world's volcanoes is the most famous example.[10] Indeed, most of them occur along mid-ocean ridges and subduction zones, and the gaps are filled with faults like the San Andreas where plates slide past each other; these have little volcanism but many earthquakes. There are exceptions to this in hot spots, and while at first that may seem to throw a wrench in the theory, it actually strengthens it. This is because these hot spots leave behind many volcanoes (the Hawaiian–Emperor seamount chain

has over 80) that occur laterally in descending order of age. This shows that the plates are moving on top of the hot spots, so the island chains can actually provide a record of the direction and rate of movement of plates.[11] This evidence, in addition to geomagnetic data telling us which direction from the north pole a rock was formed, allows us to reconstruct maps of what the world looked like millions or even billions of years ago, as well as allowing us to predict what it will look like in the future.[12] There are a couple of hot spots that are still poorly understood by geologists, such as Iceland

, so new research is ongoing to this day.

[14] and that Pangaea simply formed and broke apart during the Flood.

Before evidence was gathered for the existence of tectonic plates and the mechanisms by which they move, there were a variety of other theories to explain how continents appeared, moved, changed, and disappeared.[15] Today, a few eccentric people still believe in them.