A typical shark foraging for prey in the Red Sea.

Sharks are a pretty wide group of fish. Most are carnivorous, the Bonnethead being the only species that eats plant matter. There are also three species of filter-feeders: the Megamouth, the Basking Shark, and the Whale Shark, which is the largest extant species of fish. They are also the only group of fish that reproduce through all three known methods of birth, with the method depending on the species. They live in every ocean except the Southern Ocean. The size ranges from the eight-inch-long Dwarf Lanternshark to the aforementioned Whale Shark, which on average grows to 30 feet, though specimens of 40 feet have been reported. 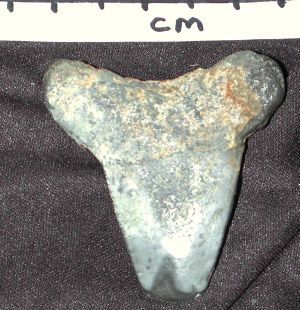 An unknown fossil shark tooth. It is possibly a Carcharocles/Carcharodon tooth.

Sharks have an extensive fossil record, and their evolution can be drawn from the fossils that they leave behind. Many creationists insist that life does not evolve, that it has been in an unchanged form for the past 6,000 years. While some animals, including sharks, have remained relatively unchanged over the past 450 million years, they have nevertheless been evolving. Shark evolution is a field not typically ventured into by creationists, due to the overwhelming evidence supporting not only the evolution of sharks, but of all life on this planet.

Extinct sharks (and some extant ones) are mostly known to science by the presence of their fossilized teeth. However, in some cases, pieces of the internal skeleton, or even complete fossilized sharks, have been discovered. (this is not proof of a "great flood", only millions of small ones that took place over the entire history of the earth by natural causes.)

Evolution of the great white shark[edit]

There are several theories as to how the great white shark evolved:

The oldest known "great white" shark teeth have been dated to the Early Oligocene Period, approximately 30 million years ago. However, these teeth differ from modern-day C. carcharias teeth in that they lack serrations. Some creationists have postulated that the lack of serrations is due to water erosion and wear on the teeth over millions thousands of years. This idea, however, has been debunked, as more derived C. carcharias teeth have been found in other locations where water erosion would appear to take a costly role in eroding the serrations on the teeth, but have not. Case in point, teeth from the Saint Marys River in Georgia. Megalodon and C. carcharias teeth have often been found in this strong-currented river with serrations intact.

The lack of serrations on basal C. carcharias teeth can be attributed to the two scientific theories mentioned previously. Otodus obliquus, or another Lamnid shark (some paleoichthyologists have suggested that Cretalamna may be another Lamnid ancestor to the great white) are largely un-serrated, with the exception of Paleocarchardon orientalis. However, recent phylogenetic analyses have shown that Lamnid sharks are most likely not the ancestor for the great white shark.

The third theory, largely accepted in the scientific community, postulates that the great white shark split off from the Isurus (large-toothed mako sharks) branch roughly 30 Ma. Transitional shark teeth have been discovered in late Oligocene deposits that contain Isurus teeth with faint serrations appearing on the base of the crown. These teeth suggest that a new transitional species appeared that was a split from the smooth-toothed mako sharks into the heavily serrated great white shark. Teeth assigned to this transitional form are dubbed Isurus escheri, which lived during the Late Miocene. Such transitional teeth are prominent in two fossil-bearing formations, the Mill, in the Netherlands, and the Bahia Ingles Formation (formally Huarra Formation) in Chile.

The complicated (and theoretical, though commonly accepted) Carcharodon lineage can be traced back to the smooth-toothed Isurolamna inflata, whose teeth grew up to .75 inches, compared to C. megalodon's 6-7 inch teeth. I. inflata lived approximately 65 to 55 million years ago; it gave rise to Macrorhizodus praecursor, a Lamnid shark from the Eocene epoch which lived about 55 million years ago, and had smooth edged, but broader teeth than its ancestor. M. praecursor then most likely gave rise to Isurus/Cosmopolitodus hastalis, which lived about 35 million years ago and developed even broader teeth. C. hastalis next evolved into the Cosmopolitodus escheri semi-serrated shark, which lived about 25 to 20 million years ago and had weak serrations on its teeth, near the base of its crown. Finally, C. escheri gave rise to the modern Great White, Carcharodon carcharias, which, based upon the fossil record, appeared about 11 million years ago, and based upon the trend that its transitional set, C. carcharias has heavily serrated teeth. Therefore, Carcharodon and Isurus both descended from Isurolamna inflata and many smooth-edged fossil teeth originally named Isurus are most likely part of the Carcharodon fossil lineage.

Before the supposed fall of man, all carnivores ate plants. This means sharks, with teeth (such as the one shown in this article), ate seaweed (close enough to plants). Finding Nemo comes to mind.

Sharks have featured in various films of different degrees of awfulness and inaccuracy, from Steven Spielberg's classic Jaws (1975) to The Shallows (2016), as well as the prehistoric shark of The Meg (2018) and the genetically engineered sharks of Deep Blue Sea (1999).[4]

The Jaws films have done a lot to cement the evil of the great white shark in the public imagination. However, they are far from accurate, particularly the later films which seem to suggest that a shark could carry a grudge against a particular person.[5] Despite what the film thinks, it's impossible for a shark to develop a taste for human flesh and turn from something that eats fish and crustaceans to something that will only be satisfied with a diet of actresses in bikinis - the idea that sharks could go rogue was once popular but is now discredited.[6] Some marine biologists criticise Jaws for hampering the conservation of sharks, but it also inspired several people to become marine biologists and learn the truth.[7]

The Meg is a 2018 film (based on a novel, Meg, by Steve Alten) in which a megalodon dwelling in a Lost World-style undersea realm at the bottom of an oceanic trench gets up to the surface and tries to bite Jason Statham.[8][9] There are several scientific implausibilities, exaggerating the beast's size and power: a megalodon might be 50 or 60 feet long with 6-foot-wide jaws, but it couldn't bite a ship in half. Nor could it survive on the meagre pickings at the bottom of an ocean trench, or the cold, or the pressure. The movie suggests that the meg's underwater kingdom could be preserved by a layer of hydrogen sulfide separating it from the ocean above, but there is no evidence for such a thing existing. Scientists also estimate that a megalodon would only need to eat one human a day, although it may prefer to eat something big every few days. The movie claims the megalodon had no natural predators, but there were other similarly large creatures such as the Livyatan, a type of whale with the largest teeth of any organism ever, and smaller animals such as killer whales can hunt in pods and attack larger prey.[10][11]

It's ridiculously fashionable for marine conservationists to assert that sharks are misunderstood. In countless nature films and TV documentaries, people have tried to tell us that sharks are not the enemy of humans and eat people only by mistake. Another interpretation is that sharks view people as competition rather than prey, and the shark bites are an unfriendly way of saying "back off".[12]

Not that it makes much difference, since being partially eaten by mistake is every bit as terminal as being completely eaten on purpose. Just leave them alone and you're good.