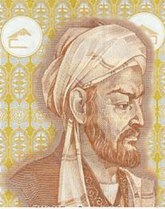 Portrait of Avicenna from a Tajik banknote.

Abū ‘Alī al-Ḥusayn ibn ‘Abd Allāh ibn Sīnā (c. 980 - 1037), commonly known in the Middle East as Ibn Sīnā and in the West by his Latinized name Avicenna, was a Persian (not Arab) polymath and scholar of damn near everything and had a brain the size of a planet. He is renowned in the Middle East the way the greatest of the ancient Greeks are in the West.

He was mostly a physician. Amongst his 150 surviving treatises on various topics, at least 40 are on medicine. He compiled The Canon of Medicine, his 14-volume medical encyclopedia, which remained a medical authority for several hundred years and was used as a set text in European medical schools until the 18th century. This was at the cutting edge of medical knowledge, such as it was, in his time, but is now used mostly as excuses and an appeal to long history by alternative medicine practitioners, which is far less reputation than he deserves.

He was considered one of the "virtuous pagans" by Florentine writer Dante Alighieri, appearing in Limbo in The Divine Comedy, alongside figures including Aristotle, Julius Caesar, Ovid, and Saladin.[2]

Avicenna's religious life in a nutshell[edit]

Avicenna, like every single person in this world, was born an atheist [Citation not needed]. Unsurprisingly, he spent his childhood and his early adulthood adhering to and practicing the religion of his parents, i.e., Islam. It is during these years that he came up with "the Proof of the truthful"[3]. However, he soon turned against his early belief system and started criticizing Islam, and in a wider context, religion. He then became an atheist which made him a target for religious nuts. He did not cave in and fought back until the time came when the ruling caliph of his time was tipped off that Avicenna no longer believed in Islam, which was and remains a sin punishable by death in Islam, and that he had to kill Avicenna. To escape imminent death, Avicenna had to write a poem stating his religiosity and that "if I am a Kafir (i.e., a person not believing in a god or gods), then there are no Muslims walking the earth". However, what he actually believed was this: "The world is divided into men who have wit and no religion and men who have religion and no wit."[4] However, because of his great influence, many Islamic texts and websites claim that he indeed was a Muslim and died one. No, he did not[5].

This medicine-related article is a stub.
You can help RationalWiki by expanding it.
Retrieved from "https://rationalwiki.org/w/index.php?title=Avicenna&oldid=2096394"
Categories:
Hidden categories: