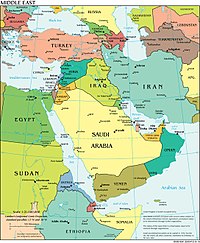 The Middle East is the part of the world, in southwestern Asia, between the Mediterranean Sea and the Indian subcontinent, where America's oil is buried under the desert sands nominally held by her arch-enemies. The region is overwhelmingly Muslim and has of late had a tumultuous history, especially between Sunnis and Shias.

America's one true ally in the region, Israel, has none of this oil found oil in territory that is not legally theirs (although Kuwait is US friendly and has oodles of oil).

The term is presently synonymous with the term "Near East" - while the Far East is (sensibly) as far away as possible from the area. The Middle East region represents an area of over 5.0 million square miles where vast deserts are common and includes the inhospitable Arabian Peninsula-so harsh it is sometimes called "The Empty Quarter."[1]

This geography-related article is a stub.
You can help RationalWiki by expanding it.
Retrieved from "https://rationalwiki.org/w/index.php?title=Middle_East&oldid=2425646"
Categories:
Hidden category: