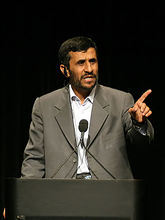 Mahmoud Ahmadinejad (1956–) is the former president of Iran (2005–2013), and a distant second in power to Ayatollah Ali Khamenei.[note 1] He's totally not anti-Semitic, he just hates Jews, and anyone that might be connected to the Jewish people, no matter how distant.

Going down the slippery slope[edit]

Although Ahmadinejad has denied accusations of antisemitism,[4] he regularly spouts antisemitic canards such as his invocations of an international Jewish conspiracy and denial of the Holocaust.[5][6][7] He has also endorsed 9/11 conspiracy theories.[8] Though Ahmadinejad has not directly implicated Jews, a common anti-Semitic conspiracy theory is that Mossad launched the attacks in order to provoke US military action in the Middle East. However, claims that Ahmadinejad has called for Israel to be "wiped off the map" are based on sloppy translations (but don't tell his official English language website that).[9] "Mak bar Israel", however, a thing that almost all Iranian leaders of any level have said openly and publicly on numerous occasions is agreed to mean "death to Israel" among almost all speakers of Persian.

Ahmadinejad's antisemitism has also led to rumors that he is secretly of Jewish descent. This is, however, bullshit.[10]

He could well be considered the Islamic equivalent of ex-president Bush, as he too has a fanatical obsession with Armageddon and piss-poor economic management. He eagerly awaits the return of the Imam Mahdi, essentially the Islamic equivalent of the messiah, going so far as to spend $17 million of government money on a mosque. There are parallels between Ahmadinejad's policies and Bush's support for faith based outreaches, as well as Bush's belief in the imminent return of a Certain Someone.

He became even more famous for making the bizarre claim that: "In Iran we don't have homosexuals like in your country. In Iran we do not have this phenomenon."[11][note 2] Some people have tried to rationalize this by saying that he was not denying that homosexual activity occurs in Iran, but that homosexuality is not part of one's identity as it is in the U.S. However, Ahmadinejad's media adviser later provided an explanation of the statement that contradicts this interpretation.[12] In layman's terms, in Iran, homosexuals get the death penalty[note 3] due to the fundamentalist religion of that state.

Ahmadinejad was elected in 2005 as a first-time candidate. He ran on an anti-American platform and emphasized Iranian nationalism, such as defending the country's nuclear arms program, expanding the nuclear program of the Islamic Republic and obstructing UN inspections of Iran's nuclear facilities. Around this time, Khamenei and President Mohammed Khatami were looking to reconcile with the US, but were spurned by Dick Cheney. After Khatami was term-limited from running again, Khamenei decided to support the hardline Ahmadinejad as a way to stick it to the West. Ultimately he was elected with a healthy 62% of the vote; the election was widely accepted as fair, believe it or not.[13]

While increasingly unpopular with the public, he maintained support from the ruling clerics, thus "winning" reelection in 2009. Although it had been anticipated that it would take some days to count the votes, the result was announced in a couple of hours. Furthermore in some voting areas the turnout was substantially greater than 100%. As the election was blatantly manipulated, outrage against this stolen vote led to the greatest public unrest that Iran had seen in over a decade, including violence and mass protests. He was constitutionally limited[note 4] to two terms and thus did not run for re-election in 2013, but had lost much of his power and popularity due to constant head-butting with Khamenei.

He tried to invade Iraq but Dick Cheney got there first.

Since being booted out of office he has reportedly returned to his original career of teaching. (Educators, we're sorry for writing that sentence.) In 2015 Ahmadinejad informed the world that the U.S was seeking to arrest the Hidden Imam who disappeared in the 10th century (C.E.) under mysterious circumstances.[14] He has recently been accused of running a "Deviant current" composed of politicians sharing his views, though he does not officially support any one political party. He also wanted to run for president in 2017, but the Guardian Council told him to fuck off.